Scandal star Kerry Washington got married a couple of months ago, in secret and without most people knowing. She shocked a lot of people in Hollywood, considering that half the people didn’t even know she was in a serious relationship! However, Kerry has now sparked another round of rumors, this time pregnancy! rumors, thanks to her outfit at the Season 3 premiere of Scandal. 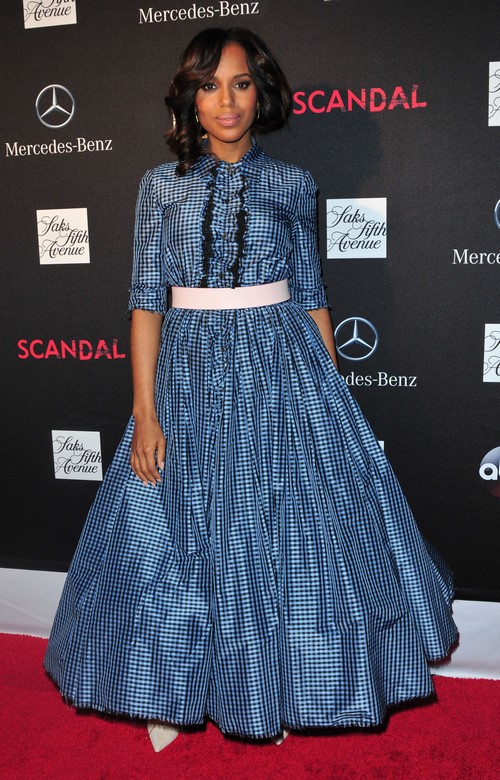 Kerry’s always been sartorially brilliant, and she really hits out of the part [fashion-wise] for most of the year. However, what she wore to the premiere was very out of place for her, and lend credence to the theories that she was pregnant, and that’s the reason she and her footballer husband got married so quickly.

Of course, if she is pregnant, that begs the question – what will happen to the show? There’s no way they’re putting it on hiatus, so the likelier choice is that showrunner Shonda Rhimes writes her pregnancy into the show. It’s not the first time it’s been done, and it’s not the last. Of course, Homeland didn’t even have to write Claire Danes‘ pregnancy into the show because she barely seemed to gain enough weight, so that might also be an option for Kerry.

Regardless, we know she’s going to continue on the show, and we know she MIGHT  be pregnant. So if she is, and they do decide to write it into the show, how do you think they’re going to do it? Will her character, Olivia Pope, find out she’s actually carrying the President’s baby? Ohh, that really would be a ‘scandal’.