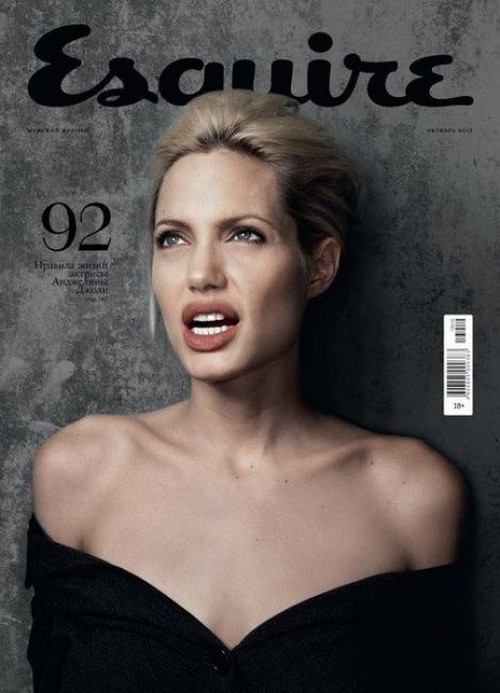 Angelina Jolie has become a women of the world, and her magazine covers definitely reflect that. While most A-list actors stick to covering US and UK magazines, with the occasional detour into Vogue Italia or Cosmo Spain, Jolie has covered practically every major magazine for every major country. Part of that has to do with the realities of being an international star, but there’s also the fact that she’s one of the best known celebrities around the world and everyone wants to see more of her.

Angelina covers the October 2013 issue for Esquire Russia, and the cover is… not flattering, to say the least. It’s not one of Angelina’s usually gorgeous profile shots, and the blonde hair, weird updo, and semi-angry expression she’s sporting all seem out of context. While Angelina’s certainly gorgeous, blonde hair was one that never suited her. She sported blonde hair in Salt, and out of all her disguises, that definitely looked the worst.

However, that does beg the question – how long ago was this photo taken? Angelina doesn’t have blonde hair right now, and the last time she had blonde hair was years ago. Was it a wig? That would certainly explain why it looks so terrible and stringy. However, you can see the black strands peeking out underneath, so my guess is that they’re just recycling a shoot she did for them years ago, most likely when she was promoting Salt.

What do you guys think of Angelina’s Esquire Russia cover? Do you think she looks good, or is too high fashion/editorial to be on the cover? Let us know your thoughts in the comments.