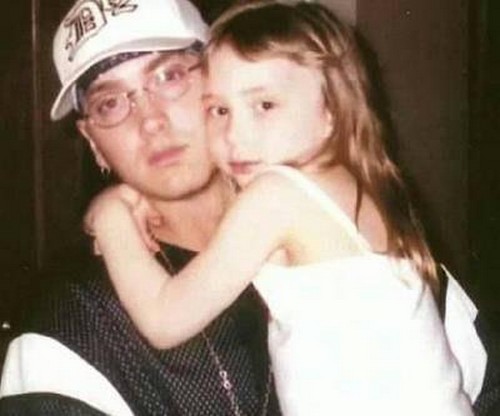 One thing that has always been clear is how much Eminem loves his little girl Hailie. He must be feeling especially proud right now because she was just crowned Homecoming Queen of Chippewa Valley High School. Hailie who is a high school senior has grown into a beautiful young lady. She is also said to be smart and community minded, which is probably why her fellow peers and faulty chose to bestow this honor on her.

She took to twitter to express her gratitude at the honor:

@haiilie_scott: So happy and thankful to be Chippewa’s homecoming queen! It’s such an honor and blessing. #grateful

It seems Eminem has done an excellent job as a father a role that he obviously covets because he also legally adopted Whitney, Kim’s child from a previous relationship, and Kim’s sister’s daughter Alaina.

Congratulations to Hailie for receiving such an honor. And congratulations to Eminem for doing such a great job raising her despite the turmoil he has faced, which includes a tumulterous relationship with Hailie’s mother and his ex-wife Kim as well as his own struggles with substance abuse and addiction.

Photo, Video: Eminem, Lil Wayne, and Keith Richards OWN The Cover of GQ