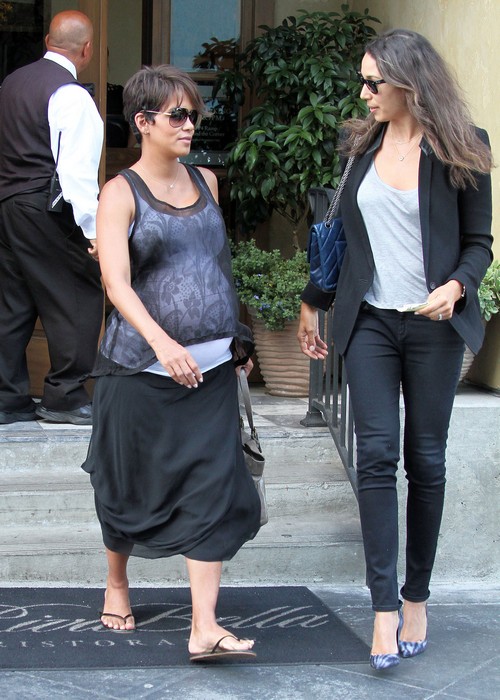 TMZ reports that Halle Berry and Olivier Martinez, after much debate and discussion, have finally named their new baby Maceo Robert Martinez.

This marks Halle’s second child, and her first son. Obviously, she wasn’t going to settle for any old name, but it definitely seems like Olivier had more say in the baby’s name than Halle did. Olivier was present for the baby’s birth on Sunday, and the boy is healthy and happy, according to the reports.

My question is – why didn’t Halle have more say in the name? Or maybe she did, and she just acquiesced to Olivier’s requests? Maceo means gift of god, and the name reportedly has a Spanish origin. And Robert is also the name of Olivier’s father. So ‘Maceo Robert’ may as well have been all Olivier’s choice, which kind of says something about their relationship, doesn’t it? It seems like whenever Halle gets into serious relationships, she gives up a level of control and autonomy she enjoys in her single life, and then everything goes to hell whenever she breaks up with that guy.

Hopefully for her, this relationship will work out. Otherwise, her son’s name will be reminding her of Olivier in the decades to come.

What do you guys think about Halle’s son’s name? In the end, Maceo is still a rare name because it traces back centuries and used to be popular in the early 1000s – so it’s classic and old, and yet still modern.

But do you think the naming was an equal decision making process, or did Olivier end up making the bulk of the decision? Let us know your thoughts in the comments.