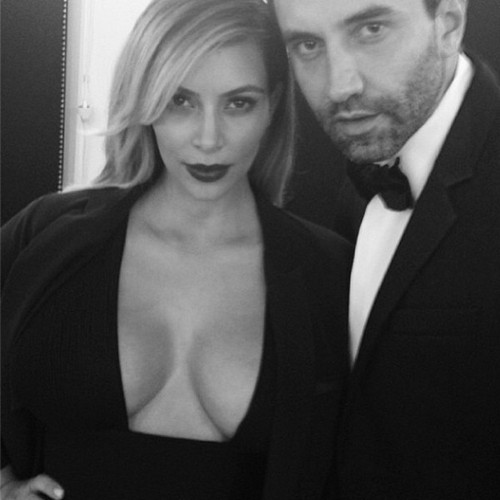 If the world is ending and there is a fiery apocalypse that’s about to destroy mankind as we know it, you know one thing we can always rely on to stay the same? Kim Kardashian being a famewhore.

Even though some people assumed that having a kid and staying away from the limelight for a few months would change Kim, it hasn’t happened. If anything, it’s increased her motivation to be papped on a nearly constant basis, and she’s quickly easing her way back onto the tabloid covers.

Anyway, Kim just posted a Keek video that is all sorts of ridiculous. First of all, she states that the paparazzi have managed to find her mom and have started running after her, and then she states that the paps have ‘no idea’ that she’s right there in the car. Basically, she’s saying that she is so much more important than anyone else in her family, and if the paps knew she was there, they would drop everything and come photograph her instead. Then, while taking the video, she is clearly pointing the camera towards her location, which is Westfield Mall. Ok Kim, let’s pretend as though you actually didn’t want to get caught, and didn’t want to get photographed.

Then, she uploads another Keek video immediately after, this time stating that she ‘cannot believe‘ that the paparazzi have not spotted her yet, even though she’s right in the car. Um, maybe they didn’t want a picture of you? Obviously, that thought would never enter her mind.

It’s completely obvious what she’s doing, isn’t it? She’s so desperate for attention and with the paparazzi not after her for a change, she thought she would upload videos basically telling them where she is. She knows that the paps are probably linked to her Keek feed, and now she can pretend as though she was followed, even though she practically led them to her. Kim Kardashian = Queen of famewhores.