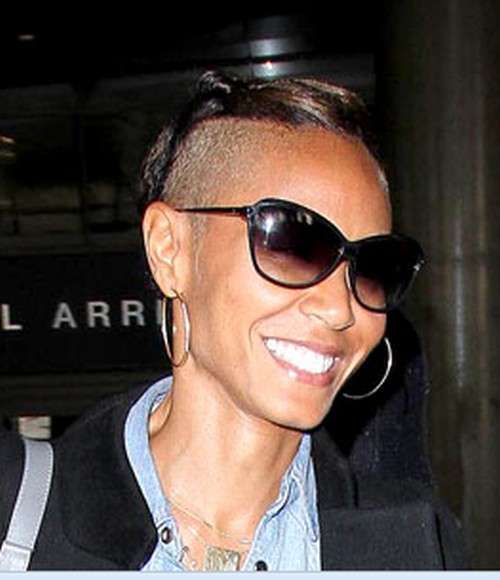 The first thing you might say when you see new pictures of Jada Pinkett Smith: ‘Whoa, what happened to Jada’s hair?’ Jada was photographed on October 7th at LAX, where she debuted a fantastic [and surprising] new haircut. Jada ended up shaving the sides of her head and leaving the top untouched in a faux mohawk, but without the actual mohawk.

Was Jada trying to copy her daughter? Is that she’s reduced herself to? Following the stylistic trends of teenagers? Yes, Jada is cool, we get it. But she’s also a professional business woman, actress and producer. I get that she hasn’t actually worked as an actress in a while, but what is she going to do if she does land a gig? Wear a wig? I suppose that’s the only option, but I have a feeling that Jada was desperately trying to change up her image.

She and husband Will Smith have been in the tabloids for all the wrong reasons recently, and Will’s latest film After Earth bombed at the box office. Maybe she thinks changing her hair will fix it? Or the simpler explanation is that after years and years of having every type of long hair and hair style imaginable, she finally got sick of it and decided to change it. Now, she can fit right in with her daughter and the other singers of today’s day and age. Why she wants to fit in with them, I really don’t understand, but who can understand half of what celebrities do?

What do you guys think about Jada’s new hairstyle? Do you think she decided to change her hair to change up the monotony of her marriage? Or maybe she just wanted a change in general? I guess we’ll start to get more of an inkling for her reasons as the days go by.