Justin Bieber And Miley Cyrus Getting MUCH Closer – Hookup on the Horizon? 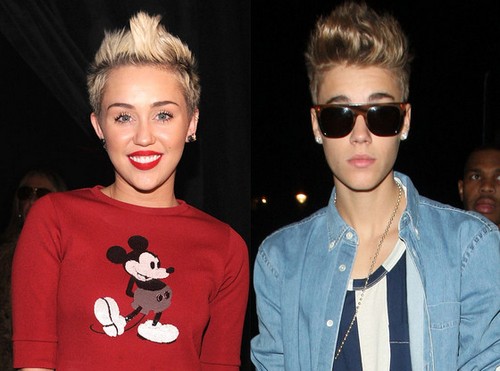 As much as I hate to admit it, Justin Bieber and Miley Cyrus actually have a lot more in common than either they or their fans will admit. According to a report from Heat Magazine, Justin is sticking by Miley’s side in the wake of her devastating split with Liam Hemsworth, and things are slowly starting to get more serious.

A source explained, “Justin reached out to say that she needs to loosen up and have fun.” Right, because she’s clearly so uptight about everything. Anyway, Justin and Miley apparently chat on the phone every night, and their relationship has gotten a lot closer in the past month. Miley even admitted in an interview with Rolling Stone that she ‘mentors‘ Justin and wants the best for him – because spoiled celebrities need more people telling them they’re special, apparently.

Right now, Miley and Justin deserve each other. They can both smoke up in public and alienate their fan bases, and they can both continue to make fools out of themselves with the media. They’re both laughingstocks in the world, but I have a feeling neither of them really care, but for different reasons. Miley’s more relevant than she’s been in years, and it has nothing to do with Hannah Montana or Liam. And Justin? Well, Justin’s a famous kid who’s been handed the world at his feet, and he’s just been spoiled beyond belief.

So yes, I can see them getting ‘closer’. The actual question is – what will happen in the future? Will Justin and Miley ever start dating? I’ve already started shipping it, if only to see the mass meltdown that will happen on the Internet.

What do you guys think? Do you think Miley and Justin should start dating? Or they should just stay friends? Or should they not even stay friends, and worry instead about putting their careers and public images back on track? Let us know in the comments.