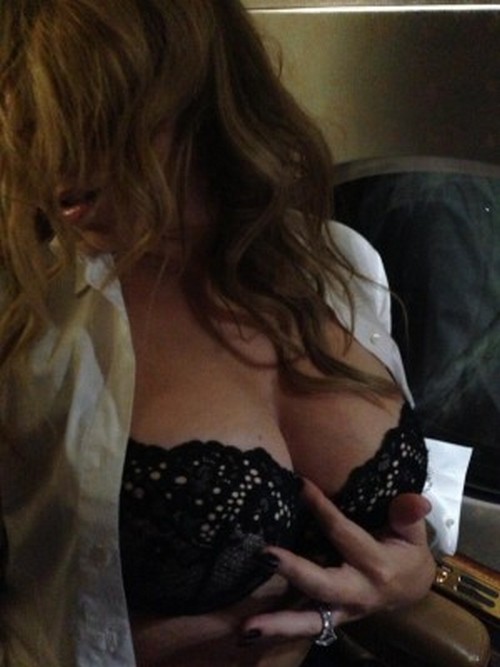 You can always rely on Mariah Carey to provide you with hilarity and entertainment. To celebrate hubby Nick Cannon‘s 33rd birthday, Mariah decided to tweet a picture of her boobs with the caption, “Happy Birthday to my Hubby @NickCannon… ‘my baby I’m waiting on youuuu’ hahaha! KKLB! GHL!!!! Mwah!!!!!”

Literally, the picture is a close up of her chest, which is barely covered by a lacy, black bra. You can’t see her face because it’s shielded by a curtain of hair, and that’s pretty much it. I can understand if she decided to take this picture and then send it as a private text to Nick, but she decided to tweet the picture to all of her followers. Again – to ALL of her millions of followers.

Why would she do that? Come on, it’s Mariah Carey. She thrives off of the attention, and she can’t live without it. This is the same woman who had her vow renewal ceremony at Disneyland, and then demanded to stay in the princess suite – the same Princess suite that is usually only used for charity functions.

If her past diva behavior wasn’t explanation enough, then any one of her interviews should do. She’s like the female Kanye West, except not as entertaining. They both think way too highly of themselves, and their sense of entitlement is astounding. But even then, Mariah somehow ends up coming off as more pretentious because she puts on an air of superiority. I mean, who else would tweet their boobs to their husband as their Happy Birthday while also tweeting their millions of followers?

What do you guys think of Mariah’s tweet? Let us know in the comments.