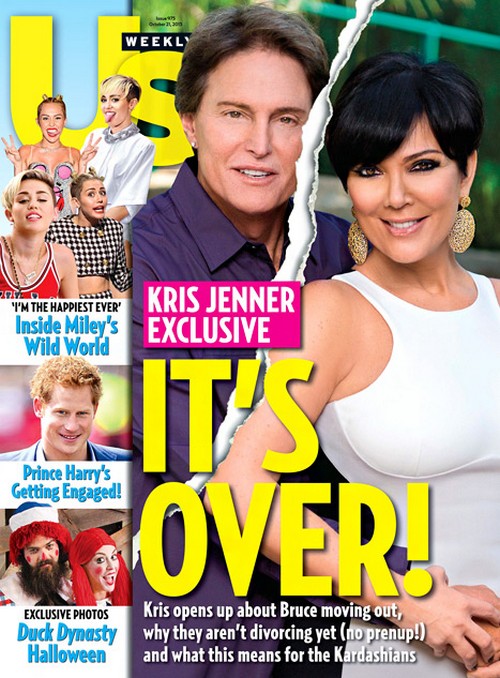 Once again, the tabloids are right. Kris Jenner and Bruce Jenner were rumored to have separated several months ago, but ‘sources’ close to the family pretended everything was fine. Alas, we’re finally getting confirmation from Us Weekly that Bruce and Kris have actually been separated since June.

However, even though they have been living separately, there are apparently no plans to divorce. Kris, who is reportedly the ‘driving force‘ in the divorce, has not contacted a divorce lawyer nor started the procedure to put the divorce in place. I mean, if we’re being honest, they obviously don’t want to get an ‘official’ divorce because it will mess with their reality show. Sources confirm that Kris and Bruce might have been separated even longer than June, but they don’t want to ruin the profits of their show, which is making a ridiculous amount of money.

Kris and Bruce also released a statement saying, “We are living separately and we are much happier this way.” Bruce is reportedly staying in his beach house in Malibu, whereas Kris continues to stay in the family home in Calabasas. It’s turning out to be a men versus women fight in the Kardashian family, since Kris is keeping all the daughters with her whereas Bruce is getting daily visits from  Brandon [Jenner] and Brody [Jenner].

Now, why did Kris and Bruce separate? If you’ve seen Keeping up with the Kardashians, the answer should be glaring – because they couldn’t stand each other. They’re much better off separately, and honestly, the only reason they probably stayed together this long is to keep the brand together. Then they realized they don’t need to stay together to do that, and they decided to separate soon after.

What do you guys think of Kris and Bruce’s separation? Let us know in the comments.