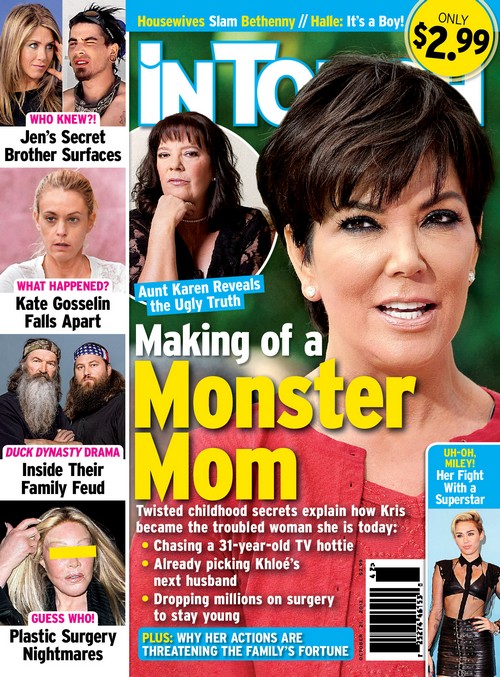 Kris Jenner‘s sister is not stopping, is she? Whatever happened between them, it must have been pretty bad to elicit this kind of tell-all behavior. Karen Houghton discusses how their ‘twisted childhood‘ has led to Kris Jenner becoming the woman she is today, and why it’s all helped develop Kris’ obsession with youth, fame, and money.

Kris’ behavior obviously includes getting millions of dollars worth of plastic surgery, manipulating and arranging her daughters’ futures to benefit herself, and chasing men that are twice her age. Karen explains that she and Kris couldn’t be more different, explaining, “She is a workaholic, a hustler. It’s called wanting power, Gucci purses, Bentleys, all the things I don’t care about that she does.”

Karen obviously does not hold a grudge [cough], but it’s not hard to believe that Kris had a twisted childhood. I mean, look at the things she’s put her daughters through! That kind of behavior can only come from someone who has been through something similar, and then it’s a simple matter of transference. Of course, there’s a lot more to it than that, and Kris’ obsession with fame and power seems to have developed in a way that her sister’s did not.

Obviously, Karen isn’t going to say anything bad about herself in her own interview, but it’s clear that she’s trying to make herself look like a hero in this situation, right? How Kris is the horrible sister, and how she’s the kind sister who managed to come out ahead? I guarantee though, she wouldn’t be talking to the tabloids if everything was fine between her and Kris.

Coincidentally enough, In Touch’s cover also features a story on plastic surgery nightmares. There are also stories on the drama within the Duck Dynasty family, the reasons for Kate Gosselin falling apart, Jennifer Aniston‘s ‘secret’ brother surfacing, and Miley Cyrus fighting with everybody on the Internet. Just another week in Hollywood.