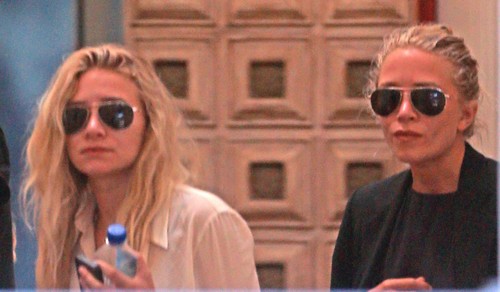 According to a new report from the National Enquirer, Mary-Kate Olsen and Ashley Olsen are jealous of Jessica Simpson‘s fashion success. They reportedly feel like they have a lot more to offer than her, and don’t understand why her hick style is selling more than their high fashion stuff. Ok, that’s not exactly how it was phrased, but that’s the gist.

Jessica’s clothing line has reportedly hit the $1 billion mark in sales, and that’s supposedly had Mary-Kate and Ashley seeing green. A source explains, “[Mary-Kate and Ashley] compete with Jessica behind the seams, and while the pint-sized blondes also head a billion-dollar empire, they’re bitter over [Simpson’s] mass-market appeal. Mary-Kate and Ashley believe Jessica’s fashions are ‘low rent.’ Mary-Kate and Ashley are regulars at all the fashion shows in New York, Paris, London and Milan, and dress way ahead of the curve. To them Jessica is flogging flannel and burlap to banjo pickers.”

Jessica Simpson has managed to sell $1 billion in sales because she is ‘flogging flannel and burlap’ to ‘banjo pickers’, otherwise known as appealing to most of Middle and Southern America. You know how many people can afford to buy the Olsens’ clothes? No, better yet, do you know how many people can FIT INTO their clothes? Probably less than 1% of the entire population of the country, and they all live in New York or Los Angeles. You know who Jessica Simpson appeals to? Everybody else.

What do you guys think about Mary-Kate and Ashley’s supposed jealousy of Jessica’s success? Do you think it’s true, or are the reports just exaggerated? Let us know your thoughts in the comments.