Amanda Seyfried And Justin Long To Split Up Because Amanda’s Dating History? 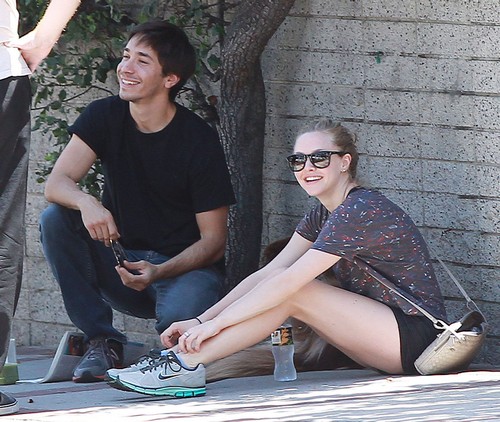 Amanda Seyfried and Justin Long reportedly started dating less than a month ago, but there is already talk of a breakup. According to a report from Star Magazine, Justin’s friends are worried about his future with Amanda because she’s a ‘serial dater’.

Star’s source explains, “Justin wants to settle down and get married, but his friends don’t think Amanda is the right girl for him. He tells his friends that he’s a big boy and they shouldn’t worry about him. But only time will tell.”

Well, Justin used to date Drew Barrymore so it’s not like he’s a stranger to relationship drama. But even then, he and Amanda did just start dating, and they already seem to be getting very serious. I mean, both Justin and Amanda are the types to be interested in serious relationships, and they don’t seem like they’re into just having fun for the sake of it.

Even then, I do understand why Justin’s ‘friends’ would be worried about him dating Amanda, considering she does move from boyfriend to boyfriend alarmingly quickly sometimes. She admitted back in July that she was getting serious about a boyfriend, but he wasn’t in the film industry. So in the three months time between now and then, she’s found time to break up with that boyfriend, meet Justin, and start dating him? The timeline seems a tad bit quick, no?

What do you guys think about Amanda and Justin dating? Do you think she will break his heart and find another boyfriend within the next couple of months? Or will they last a lot longer than? Let us know your thoughts in the comments.