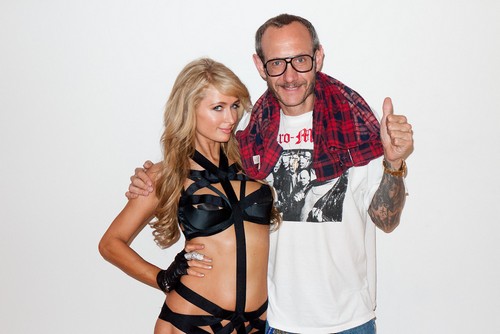 Paris Hilton might be catching on to the Fifty Shades of Grey craziness because she posed in several bondage themed outfits for photographer Terry Richardson. Paris and her sister, Nicky Hilton, were both there but the pictures with Nicky are all pretty demure.

These photos were taken all the way back in September, and Paris had teased one picture to the audience via Instagram back in September. Now that the rest of the pictures are out, do they live up to what she posted? They certainly are NSFW, but they’re also done in a way that comes off almost…classy? I don’t know if classy is the right word, but a lot of people wearing this outfit would make it trashy, and Paris actually doesn’t.

The past few years, Paris has been working hard to clean up her image. She’s stayed out of the tabloids for the wrong reasons, and she has made sure to stay busy with charity and other philanthropic work. She returned to the spotlight this year with The Bling Ring, where she was one of the celebrities robbed in the real-life case, and she let director Sofia Coppola use her house for filming. She went to Cannes and did several rounds of publicity for the film. After that, she’s seemed to slowly ease her way back into the spotlight, but it’s been done without hitting audiences over the head.

Right now, Paris is working on her music career and writing songs, but we’ll have to see what the future holds for her. What do you guys think about Paris’ career choices, and her bondage photos? Let us know your thoughts in the comments.