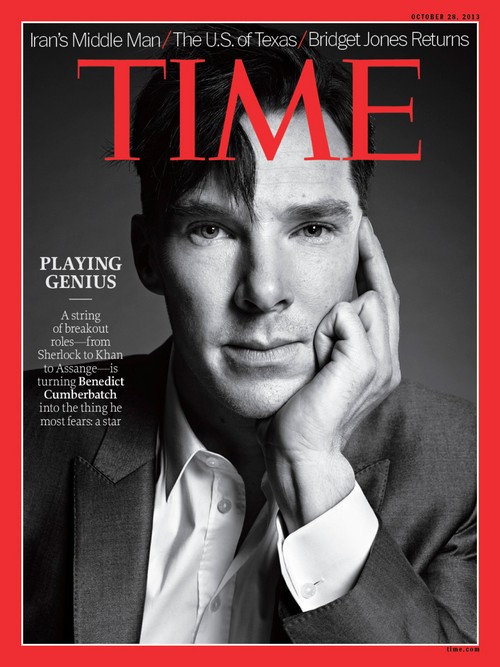 Benedict Cumberbatch has never been so ubiquitous, so it seems appropriate that he’s on the cover of Time Magazine. With four movies coming out this fall, and five movies in 2013, there’s no way audiences won’t recognize his face, even if they don’t know his name. Two of those movies are massive blockbusters – Star Trek Into Darkness [which released in May] and then The Hobbit: Desolation of Smaug in December.

He’s also in a trio of awards bait movies, two of which are coming out at the same time this weekend. The Fifth Estate and Twelve Years a Slave are both releasing this weekend, and August: Osage County will release later in December. He’s basically going to to be Jessica Chastain circa 2011.

The caption under his photo on Time’s cover reads: ‘Playing Genius: A string of breakout roles – from Sherlock to Khan to Assange – is turning Benedict Cumberbatch into the thing he fears most: a star.’

The photographer of the cover shot, Paola Kudacki, discusses her experience with him, saying, “I was very excited because his career has been so big but it’s just beginning. I wanted to capture the intensity of his face but also the quietness. I wanted to take a serious approach, very quiet, and intimate.” She adds that they had a very collaborative and fun experience during the shoot, but she also has some interesting thoughts about the finished product, saying, “He’s looking into the camera, very confidently, but there’s something kinda broken. It’s kinda like when he says he likes to bring humanity to the character.”

And that, in a nutshell, is why Benedict Cumberbatch is famous. No matter who he’s playing or when he’s doing it, he has an ability to seamlessly take over every character – whether ugly, handsome, nice, rude, horrible, and basically every spectrum of human behavior.