Bruce Jenner Vows To Destroy Kris Jenner: Can You Blame Him? (PHOTO) 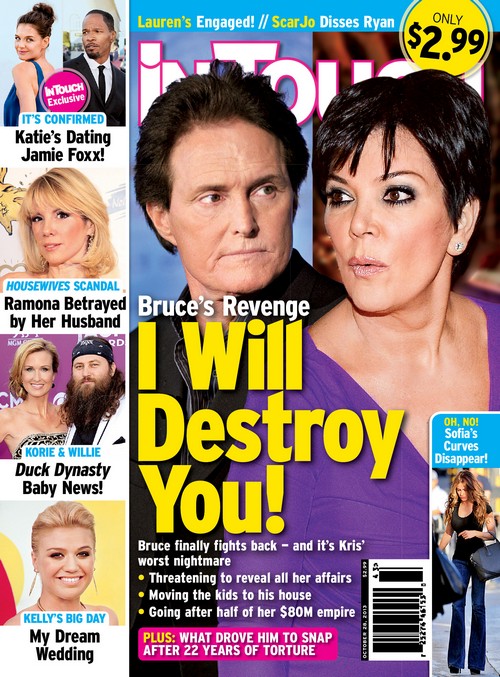 According to the latest cover issue of In Touch Weekly, Bruce Jenner has gone to ‘war’ with Kris Jenner after their breakup went public. The report claims that Bruce has decided to finally fight back, after years of getting bullied and being forced to stay silent. Bruce’s ‘revenge’ apparently consists of threatening Kris with revealing all of her affairs to the public, moving the kids to his house, and going after half of her $80 million fortune.

The report also promises exclusive details on what exactly drove Bruce to ‘snap’ after 22 years of ‘torture’. Ouch. Well, at least he’s out of the marriage – and I’m sure that’s at least a minor consolation to him.

The In Touch cover this week also casts focus on Sofia Vergara‘s body, and how all of her curves have managed to disappear so quickly. Well, that’s the downside of working in Hollywood – the pressure to lose weight eventually gets to you, no matter how skinny or curvy you were to begin with.

There’s also a feature on Kelly Clarkson and her ‘dream wedding’, which will be happening fairly soon. There’s also a story about Duck Dynasty and Korie and Willie’s baby news. There’s a Real Housewives scandal [when isn’t there a scandal?], with Ramona betraying her husband.

Finally, In Touch ‘confirms‘ Jamie Foxx and Katie Holmes dating, calling it an exclusive since they were the first to report on it yesterday. I guess the next time Jamie meets Tom Cruise, things probably won’t be so friendly.

What do you guys think about these reports? Let us know your thoughts in the comments.