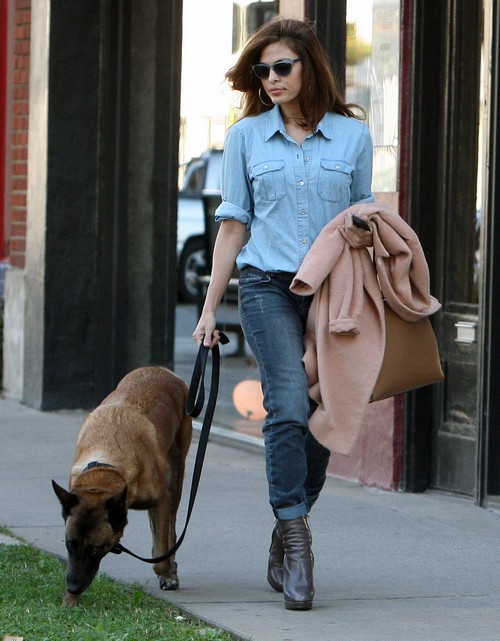 Is Eva Mendes a controlling girlfriend? According to a new report from Star Magazine’s print edition, Eva is incredibly controlling of Ryan Gosling, and doesn’t let him leave the house without approving his outfits.

A source explains, “Eva does all Ryan’s clothes shopping for him and tells him what to wear, all the way down to what buttons he should or shouldn’t button on his shirts. She likes to be in control.”

Ok, while I have no problem believing that Eva would exhibit that kind of behavior, I doubt Ryan would allow that kind of behavior. He may humor her need to dress him up or something along those lines, but I doubt he’s being ‘controlled’. This whole ‘she likes to be in control’ thing comes off as though it was written by a weird fan who’s overly obsessed and invested in Ryan and Eva’s relationship.

That being said, there is word on the streets of some possible trouble between Ryan and Eva. Although the couple was still going strong last month, several sources have told us that Ryan and Eva might be fighting over their future together. They both have very slow careers right now – Ryan by choice and Eva by necessity – so it’s not like they don’t have the time to spend together. But Eva reportedly wants to get married and Ryan apparently wants to wait. Or maybe they’re trying to throw people off, and they’ll end up getting secretly engaged by the month’s end.