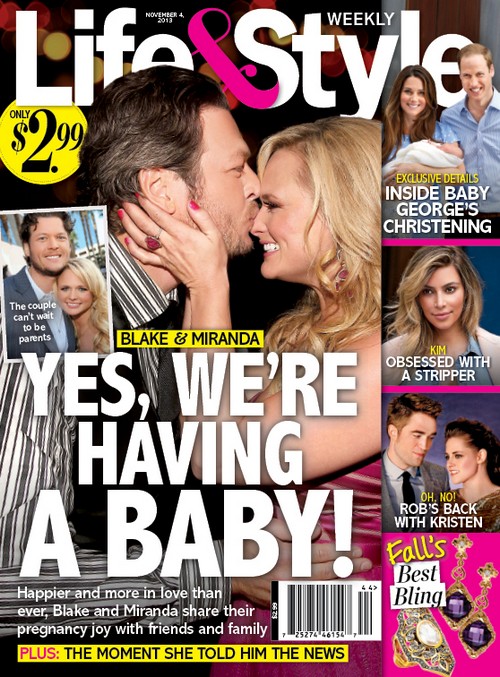 According to the new cover issue of Life & Style Magazine, Miranda Lambert and Blake Shelton are expecting a child, and reportedly ‘can’t wait to be parents’. The report states that Blake and Miranda are happier and more in love than ever before, which is certainly a change of tune from the usual cheating and fighting rumors.

Miranda and Blake are one couple who are ubiquitous on tabloids, whether it’s with happy news or sad news. Usually, reports about them tend to go in the ‘sad’ vein, if only because Miranda has always been very vocal about how little she trusts her husband, and how she usually checks his phone, etc. This has obviously led to a smattering of reports on the state of their marriage, and how he must have cheated on her, for her to react this way.

There has never been any proof, but as I always say, there’s never smoke without fire – and in this case, there’s too much smoke for there to be nothing going on. But alas, even if there is, they’re probably not going to do anything about it. The sad reality of Hollywood is that famous spouses cheat, and it even happens with the golden couple of country music. However, with Miranda supposedly expecting, I’m sure it’ll be a while before we hear about the cheating rumors again.

Life & Style also puts the spotlight on Prince George’s christening, Kim Kardashian reportedly ‘obsessed’ with a stripper [um, what??], and Robert Pattinson being back with Kristen Stewart. Um, if Rob and Kristen were back together, I can guarantee that every Twi-hard in the world would have announced the news at the top of their lungs already.