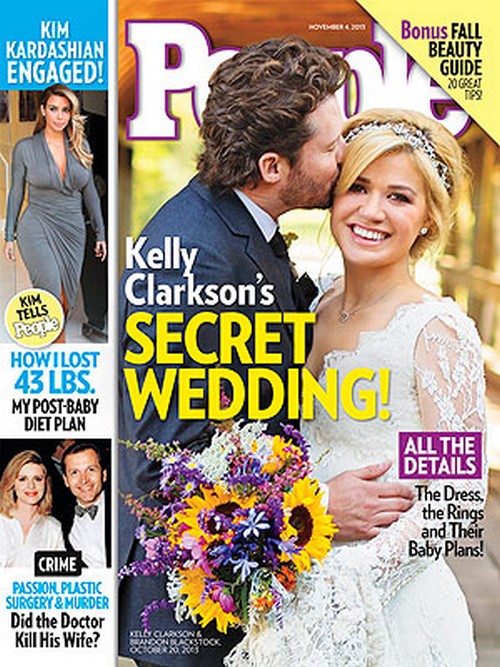 People Magazine’s new cover is dedicated to Kelly Clarkson‘s wedding to Brandon Blackstock. As the official mouthpiece of the celebrities, the report is obviously well detailed and covers all the bases, including tons of exclusive photos.

Also, Kelly was reportedly planning a much more grand ceremony at one point, with over 200 guests, but it looks like she ended up going much smaller. In the end, her wedding was intimate and took place on a farm in Tennessee, with a friend saying, “She has waited so long to have this.” According to the report, Kelly and Brandon have plans to have children soon, and they’re really looking forward to raising a little brood.

People also [obviously] has a story about Kim Kardashian‘s engagement to Kanye West, and also an exclusive interview about how she lost 43 pounds in her post-baby diet plan. You think she would ever admit to getting plastic surgery, or is she going to pretend as though she actually lost all that weight due to dieting and exercise? Or does the calling paparazzi and being a famewhore count as exercise these days?

What do you guys think about the details of Kelly’s wedding? Do you think the crystal headpiece was going overboard, or is there no such thing on your wedding? Also, what do you make of Kim pretending to have lost all that weight due to her diet? Let us know your thoughts in the comments.