Gwyneth Paltrow Desperate To Cover Up Affair With Jeff Soffer 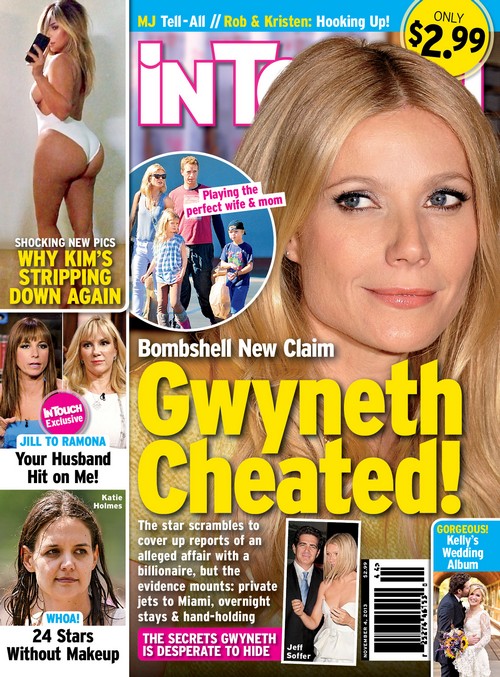 According to the latest cover of In Touch Weekly, Gwyneth Paltrow is desperate to cover up the cheating rumors about her and Jeff Soffer, probably because they’re true.

It all started when Vanity Fair went digging in their quest to write a scandalous tell-all, and it looks like they struck gold. There were a lot of whispers of Gwyneth and hubby Chris Martin being on the rocks a couple of years ago, and how Gwyneth might have turned to Jeff for ‘comfort’. At the time, the reports were shot down and not mentioned again, but I don’t think they’ll go away so easily this time around.

According to the cover story, time is ticking as Gwyneth is scrambling to cover up the reports about her affair with Jeff, but the evidence continues to increase: private jets to Miami, hand-holding, and overnight stays. If all of that doesn’t prove her guilt, I don’t know what will.

This isn’t the first time that tabloids have focused on cheating rumors, but I think this is the first time that they come after a legitimate publication. Page Six and Vanity Fair have both been leaking various little tidbits about Gwyneth’s past that has her very worried about the VF article that’s about to come out, and it’s obvious the tabs are just piggy-backing off those stories. That being said, Gwyneth  has every right to be worried – she and Chris are reportedly stronger than ever, but how strong will they stay if Chris finds out she cheated on him?

In Touch also has a feature on 24 stars without makeup [with a horrible picture of Katie Holmes on the cover] as well as new pictures of Kim Kardashian stripping down again, a.k.a. the selfies she keeps taking of herself half-naked.

What do you guys think about Gwyneth’s quest to cover up any evidence of her alleged affair? Do you think Vanity Fair will somehow prove the allegations? Let us know your thoughts in the comments.