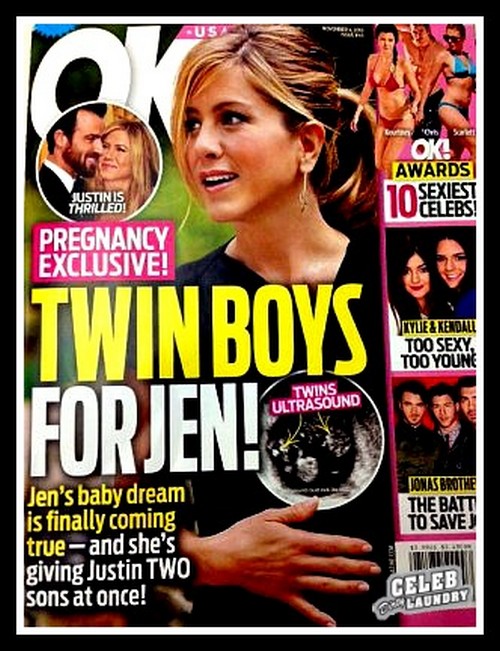 According to the latest report from OK! Magazine, Jennifer Aniston is pregnant with twin boys. The report states that after undergoing several fertility treatments in her quest to get pregnant, she’s finally hit the jackpot.

Apparently, Jen is hoping for twins whereas fiance Justin Theroux is hoping for boys. The source also adds that with the good news, Jennifer and Justin are already looking to hire help for when the babies arrive, adding, “[Justin] taking the lead in interviewing and hiring two nannies and one extra bodyguard specifically for the twins.”It’s interesting – even though OK! claims that Jennifer is *actually* pregnant with twins boys, with a picture of an ultrasound on the cover of the magazine, they then verify that Jennifer is just ‘hoping’ for twins in the actual report. So whose ultrasound has made their way to the cover of the tabloid? A gross invasion of privacy, is it not? I suppose they probably had permission from whoever granted it to them, but it’s still a bit twisted to pretend as though that’s Jennifer’s and Justin’s, especially since the average tabloid buyer isn’t discerning enough to realize the difference.

Anyway, OK! has repeatedly put out the Jennifer Aniston pregnant story multiple times in the past few years, especially with twins. Just because Brad Pitt and Angelina Jolie had twins, it seems like they think that alleging that Jennifer’s also desperate to have twins will gain them an increased audience. The sad thing is – it probably will.

What do you guys think about OK!’s report on Jennifer’s pregnancy? Do you think she’s actually pregnant with twins? Let us know your thoughts in the comments.