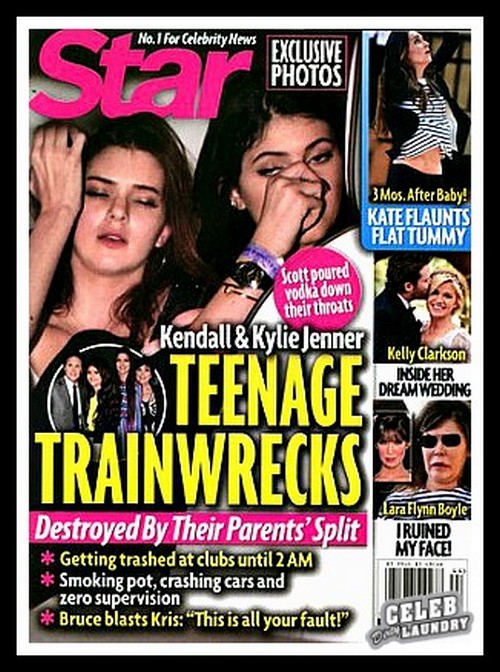 Kendall Jenner and Kylie Jenner are not happy. They were featured on the cover of Star Magazine this week in an issue devoted to how they are spiraling out of control and into ‘trainwreck territory‘ and how their partying is getting out of hand.

A source tells Star, “Kendall and Kylie were good, innocent girls, but all the negativity and fame surrounding their family has sent them over the edge. No one is there to supervise them, and everyone is there to make them happy. It’s a recipe for disaster.” Since the Kardashian family has such wonderful role models, Scott Disick has taken them partying several times and during one such occasion, poured vodka down their throats.

However, Kendall has taken to Twitter to hit out against all the reports, saying, “I am so done with everyone making my little sister and I out to be something that we are not. Shut up with these stupid rumors and stories. No one has fake ID’s and no one’s partying. we know that’s what all you slimy media people want to see but that is not going to happen. We’re smarter than that, we have goals and personally I think it’s sad that some people sit at their desk making things up… about girls that are trying to have a career just like everybody else. Get over it. No story here.”

While she and her sister may have goals, they have already done themselves a disservice by dropping out of school – and they wonder why people think they’re turning into trainwrecks. What else are people supposed to assume when two teenage reality stars drop out of school to become ‘fashion designers’ and then seem to spend all their time clubbing and getting drunk? And they can deny that they party as much as they want, but it’s already been proven that they’ve been to 21+ clubs. So Kendall can tell the media to ‘get over it’ as much as she wants, but I think she should seriously reevaluate her own life first.