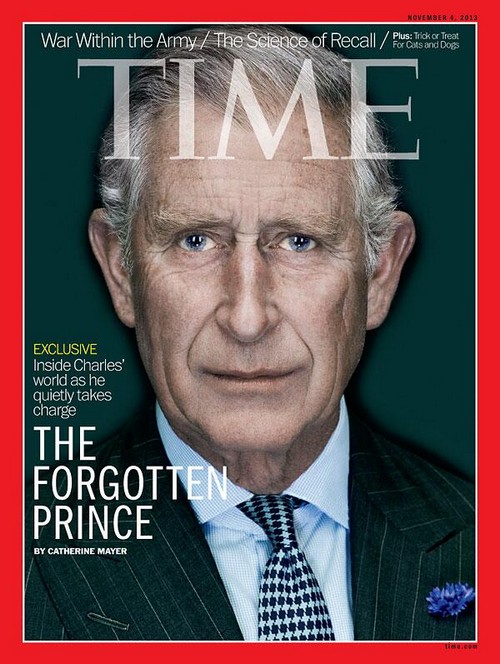 Most people seem to forget that after Queen Elizabeth dies, it will be Prince Charles who inherits the throne, not Prince William and definitely not Prince George.

It seems that Time Magazine wanted to remind people of this fact, since they put Charles on the cover of their latest issue with the title ‘The Forgotten Prince‘. Right now, Queen Elizabeth is 87 years old and she has no intention of abdicating, but everyone knows that she’s not going to live forever. At 64 years old, Charles is next in line to the throne and he’s slowly been accepting more responsibility as his mother gets older and his son gets more famous.

Time’s goal seems to be to reveal the ‘real’ Prince Charles, who is not ‘aloof, spoiled and desperate to become King‘ as misconceptions state. She says that instead, Charles is a, “passionate philanthropist, magnetic in his personal interactions and deeply committed to making the most of his inherited position.”

‘The Forgotten Prince’ title clearly refers to the fact that everyone’s attention is either focused on the Queen, Prince William and Kate Middleton, or Prince George. Nobody really talks about Charlies anymore, and actually, his wife Camilla Parker-Bowles is more present in the tabloids than he is. And even when he is spoken of, it’s never in a flattering tone, but rather dismissive of his desperation to become King – just as the article stated.

The article tries its best to correct the misconceptions, and adds that Charles would accept his duties ‘joylessly’, especially considering it would mean the loss of his mother.

What do you guys think? Do you buy the article, or do you think it’s just a desperate attempt to clean up Charles’ image before he starts taking more responsibility? Let us know in the comments.