Brad Pitt Discusses Chaos Of Travelling With His Large Family 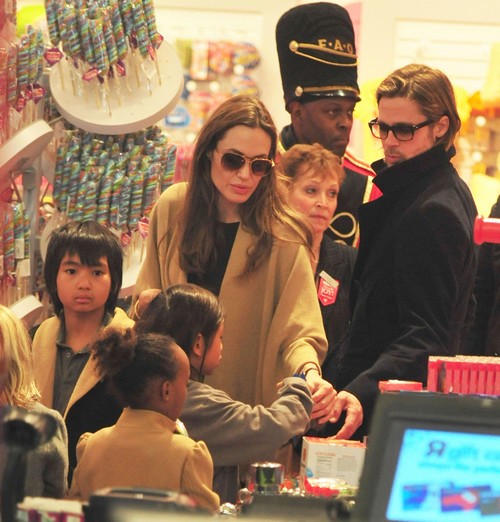 Brad Pitt is one of the biggest movie stars in the world and also has a massive family unit, so it’s understandable that life moves along at a crazy pace – especially when they travel together.

Brad, while promoting 12 Years A Slave, spoke to the Express about travelling with such a large family, explaining, “Well, we are lucky. Most of the time we travel together. We are used to the chaos when you have to go around the world, and we always try to turn into an adventure. But when I do have to travel alone, I always try to rush back to my family. I miss them when I am on the road.”

Brad revealed that he and Angelina Jolie usually take turns watching the kids, and as much as possible, they try not to split the children up. Right now, Brad is with the twins in England while he’s been filming the WWII film Fury, and Angelina’s with the rest of the kids in Australia while she directs Unbroken.

The Express article also touches upon how this year’s been very successful for Brad in general. After a spate of negative reports and low box office predictions, World War Z ended up becoming one of of Brad’s most financially successful films ever. Then, he’s a frontrunner to win the Best Picture Oscar as a producer of 12 Years A Slave, which many Oscar experts are touting is the film to beat come March at the Kodak theater. No doubt, the entire family will make their way to Los Angeles when the time comes.

What do you guys think about Brad’s comments regarding his family, and do you think he’ll win an Oscar this year? Let us know your thoughts in the comments.