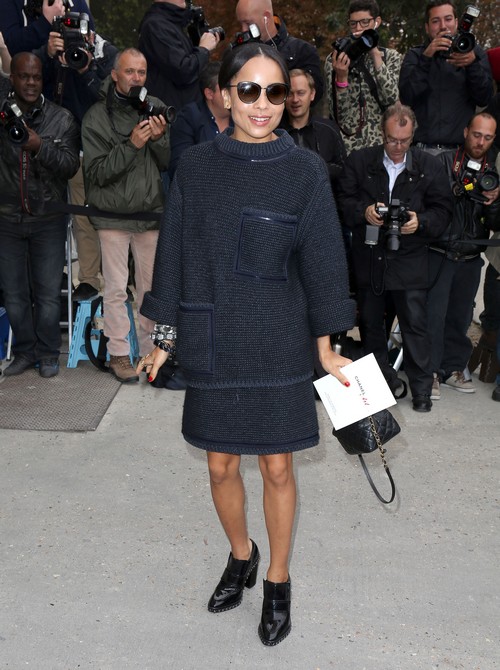 Zoe Kravitz has managed to date some of the hottest guys in Hollywood, and according to a report from Star Magazine, she’s still hooking up with two of the biggest names she’s dated. Penn Badgley and Michael Fassbender, arguably on the opposite sides of Hollywood star power, are reportedly both besotted with Zoe and want to have a relationship with her, but she’s still debating about who she’s willing to date long-term.

Zoe and Michael, even though they officially ended things in 2011, have been going back and forth ever since then and reportedly started hooking up again last month. A source explains, “Zoe initiated the reunion. She finds him physically irresistible.”However, Zoe’s also reportedly on talking [and possibly more] terms with her most recent ex-boyfriend, Penn, who she broke up with in June. A source explains that Zoe’s feeling pressured to make the decision between both of her current beaus, adding, “Penn’s pushing Zoe to make a decision between him and Michael.”

The source does say that Zoe is ‘attracted‘ to Michael’s A-list status and Oscar prospects, but if Zoe cared about all that, I doubt she would have dated Penn in the first place. While not a bad actor, he’s on the B-list at best and is best known for a CW show – not exactly comparable to a critically acclaimed actor who’s slowly climbing the A-list, is he? Despite that, I have a feeling Zoe’s going to end up with Penn, if she ends up with either of the two. Michael doesn’t seem to even have time to sleep, much less have and maintain a regular relationship with a girlfriend. His next few years seem jam-packed with films, a luxury and a curse that Zoe and Penn don’t seem to have.