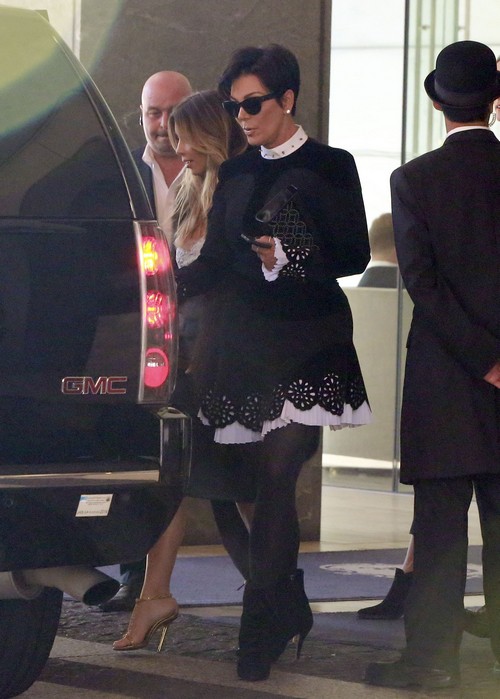 Kris Jenner is still angry that her talk show was cancelled, and she’s taking it out on everyone she deems responsible for the cancellation. In her mind, her show was unfairly cancelled and should have gone on for a lot longer, something most industry folks agree were just delusions of grandeur. The fact that Kris Jenner was even given a talk show to begin with was ridiculous, much less have it continue for more then one season. After she ran through a roster of everyone big in the reality TV world, who would be left? No A-list, B-list, or even C-list stars would be caught dead on her show, and it would have nosedived even further had a second season been commissioned.

Regardless, Kris is determined to get retaliation. According to an online post from Access Hollywood executive producer Rob K. Silverstein, Kris banned the outlet from attending Kim Kardashian‘s birthday party in Las Vegas because they panned her talk show with negative reviews.

Silverstein wrote, “We were planning on covering but Kris Jenner has ‘blacklisted’ us. The reason: She was not happy with a review we aired of her talk show a few months back. First, her talk show was not great and she is not a talk show host, no shame in that. We are not mouth pieces for the Kardashians. There are plenty of other outlets that are. We cover the Kardashians fairly. We have also criticized them where we felt it was justified. We get e-mails from viewers all the time asking us to cut down or even eliminate our coverage of the Kardashians. Our right is to cover the family as openly and fairly as we cover all of Hollywood and despite the ‘blacklist,’ that’s exactly what we will keep on doing.”

Ouch, he didn’t hold back, did he? But I think it’s about time that the media starts fighting back. It’s one thing when Angelina Jolie or Tom Cruise play ball with the media, but you know things are getting skewed when D-listers like the Kardashians are trying to dictate their power. Um, sit your ass down, Kris Jenner – you are not a star, and you will never be a star. And I’m glad an outlet as powerful as Access Hollywood is standing up to them. Let’s hope more media networks follow the trend.