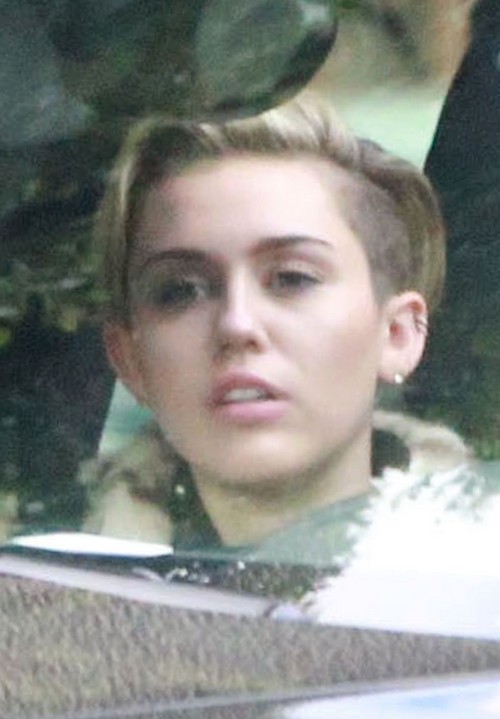 What on earth is going on with Miley Cyrus, is what almost no one in the world is asking right now. Instead of being genuinely worried about a teenager’s out of control behavior and cries for help, most of the world is fixated on her boobs, her body, her twerking, or her continued displays of wild behavior. What nobody seems to realize that Miley is constantly referencing how miserable she is in every interview she gives, and although she seems to revel in the spotlight, I think it’s short-lived and a way for her to forget about whatever issues are plaguing her.

The biggest red flag: Miley has started partying with Lindsay Lohan, the purveyor of all career and life destroyers. A source told Page Six that Miley and Lindsay were spotted at a Chelsea Club in New York City, explaining, “Lindsay climbed over from her table next to the DJ booth to Miley’s table. The two immediately began whispering in the corner. From that point on, the two tables essentially became one.”

They apparently stayed until 5 A.M. and even left the club together, going to do god knows what drugs together. This is a worrying sign for anyone who’s invested in Miley’s career or even life, and it’s extremely embarrassing that her parents just don’t seem to care. Right now, she’s embarked on the path that took Lindsay Lohan from A-list celebrity to D-list washed up has-been, going through multiple rehab facilities and not taken seriously by anybody in Hollywood. I’m sure whatever else she wants, Miley doesn’t want to end up like Lindsay. But if she doesn’t stop herself soon, there isn’t going to be much anybody else can do.