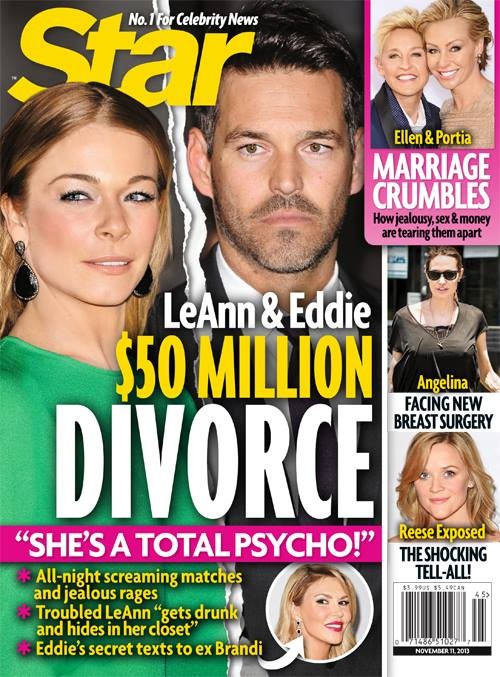 Our favorite fan fiction generator, sorry I meant Star Magazine, has a new cover. According to this week’s cover issue, Eddie Cibrian and LeAnn Rimes are currently going through a massive, $50 million divorce. Eddie’s apparently calling LeAnn a ‘total psycho‘, to which I ask: he only just figured that out now?

The report claims that the couple has started having all-night screaming matches, with LeAnn getting drunk and hiding in her closet while Eddie has secretly been texting his ex, Brandi Glanville. Ok, so here’s why that would never happen – if Brandi EVER got a text from Eddie, she would make sure to publicize that fact as far and wide as she possibly could, and it wouldn’t remain ‘secret’ for very long. Also, LeAnn wouldn’t get drunk and hide in her closet – she would go and write random, cryptic messages on her Twitter while posting selfies of herself on Instagram for an ego boost.

Star also has a feature on Ellen Degeneres and Portia de Rossi‘s marriage is falling apart, with insecurity over sex, money, and jealousy ‘tearing them apart’.

There’s also a story on Angelina Jolie facing another breast surgery, as well as Reese Witherspoon ‘exposed‘ with a shocking tell-all. Out of all these stories, the only one I’m willing to buy is the Ellen and Portia breakup one, and Reese being ‘exposed’. If LeAnn and Eddie truly were in the midst of a divorce, I guarantee that we would be hearing about it directly from LeAnn, and she probably wouldn’t let anyone forget.