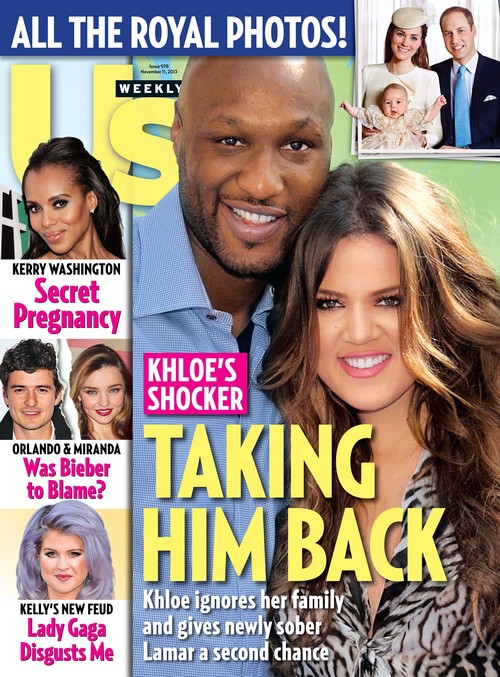 Since US Weekly’s cover reveals that Khloe Kardashan is taking Lamar Odom back, it must be true. US doesn’t bullshit as much as the other tabloids, and since they’re best friends with the Kardashians, this is information that Khloe clearly wanted out there. According to the report, Khloe has ignored her family’s advice and decided to give the ‘newly sober‘ Lamar another chance, despite her personal misgivings.

Is she making a stupid decision? Probably. Lamar may be ‘newly sober’, but he hasn’t even gone to rehab. It’s hard enough for newly rehabilitated drug addicts not to relapse, much less drug addicts that never went to rehab and are constantly around drugs for their profession. He’ll end up relapsing within a few months, and she’ll be right back to where she started.

There’s also a report on Kerry Washington‘s pregnancy, which Kerry has managed to keep secret from the public with her ninja-like stealth. It’s now Kerry versus the media, 2:0. She managed to get married without anyone knowing, and she’s secretly been pregnant without anyone knowing. And for now, that’s as much information as we’re going to get considering how private she is.

There’s obviously a feature on Miranda Kerr‘s and Orlando Bloom‘s divorce, but I’m not able to understand why a semi-legitimate tabloid like US Weekly is blaming Justin Bieber for the split. I mean, do they actually believe that Miranda would hook up with Justin? I doubt Miranda’s leaking this since it’s just making her look bad, and Justin’s team knows he has enough bad publicity to last him a lifetime. It’s a curious situation, and while I’ve decided that Miranda’s something of a famewhore, I don’t think she would sink so low as to hook up with Justin Bieber.

Of course, there’s also the new feud between Lady Gala and Kelly Osbourne. It’s not very surprising since Gaga and Kelly are two celebrities that always seem to be in feud with random people in Hollywood, and now they’re in a feud with each other. Fitting, really.