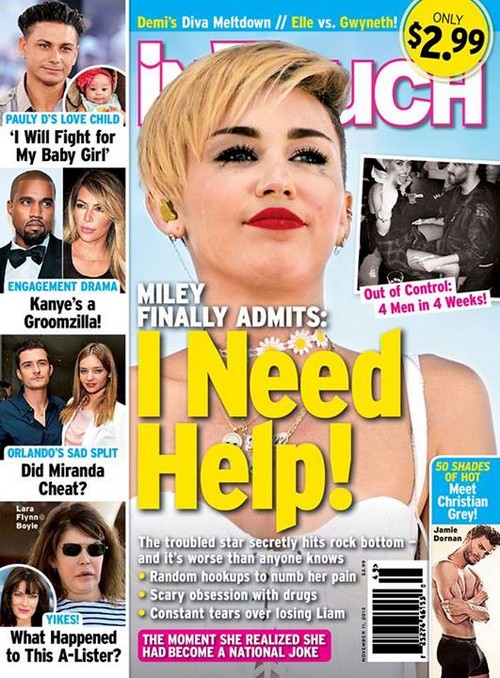 According to the latest cover of In Touch Weekly, Miley Cyrus has finally admitted that she needs help after weeks of out-of-control partying. According to the cover, Miley realized she hit ‘rock bottom‘ when she was participating in random hookups to ‘numb her pain’ [including four hookups in four weeks], turning obsessive about certain drugs, and constantly crying over Liam Hemsworth. Fittingly enough, In Touch also puts in a blurb, “The moment she realized she had become a national joke‘. You know you’ve sunk to an all-time low when a tabloid writes about you becoming a national joke.

Now, In Touch might be reaching in the actual article, but I don’t think it’s difficult to see that Miley really is crying out for help with her recent behavior. At first, I really thought she knew what she was doing, and that she might have been playing the media all along. Then, it became clear that the breakup with Liam had affected her more than she let on, and she was just using the spotlight as a replacement for the relationship. However, it was REALLY obvious that she had hit rock bottom when she started hanging out with Lindsay Lohan. When someone voluntarily hangs out with the Cracken, you know they’re in trouble. I don’t know if anyone can get through to Miley at this point, especially since her family is absolutely useless, but we can only hope she comes to her senses soon.

In Touch also has a feature on Kanye West‘s engagement to Kim Kardashian, and the drama that’s already ensuing. Apparently, Kanye’s something of a ‘groomzilla’ – is anyone surprised? Then, there’s of course a feature on this week’s top breakup story: Miranda Kerr and Orlando Bloom. In Touch seems to be doing a piece on the question that’s on everyone’s mind: did Miranda cheat? And finally, a terrifying recent photo of Lara Flynn Boyle, accompanied with the caption, ‘What happened to this A-lister’? What happened, indeed.