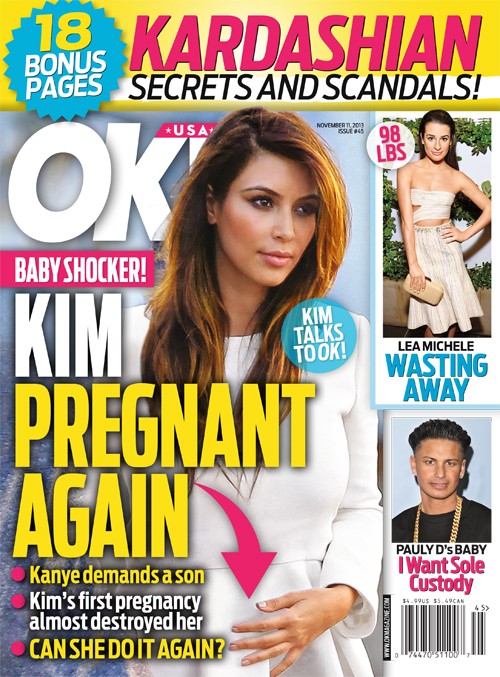 Is Kim Kardashian pregnant again, just months after giving birth to her first child? According to the latest cover issue of OK! Magazine, Kim is pregnant again, and this time Kanye West is demanding a son. Not only that, but after a very difficult first pregnancy, is Kim ready to go through another nine months of tabloid speculation? What are they asking, of course she is! Sure, she might not be so happy about the comparisons to Shamu in the media, but this way she’ll guarantee that she’ll be the center of attention for yet another year.

Reality stars, much like movie stars, constantly live in fear of being replaced – in fact, reality stars more so than movie stars. Think about it – reality stars have no discernible talent, and they’re literally famous for just being famous. It’s incredibly easy to replace these people, and it’s actually a testament to the Kardashians’ willpower that they’ve managed to stay relevant for so long. And if Kim is pregnant again, whether intentionally or unintentionally, the media will guarantee her another year of coverage.

There’s also a story on Lea Michele‘s weight loss since Cory Monteith‘s death, and how she’s ‘wasting away‘ at 98 pounds. Um, I don’t know if OK! ever saw Leah clearly, but she’s always been that skinny. Sure, she’s had some fluctuations in weight here and there, but she’s been in that ballpark for a good few years now.

What do you guys think of these reports? Let us know your thoughts in the comments.