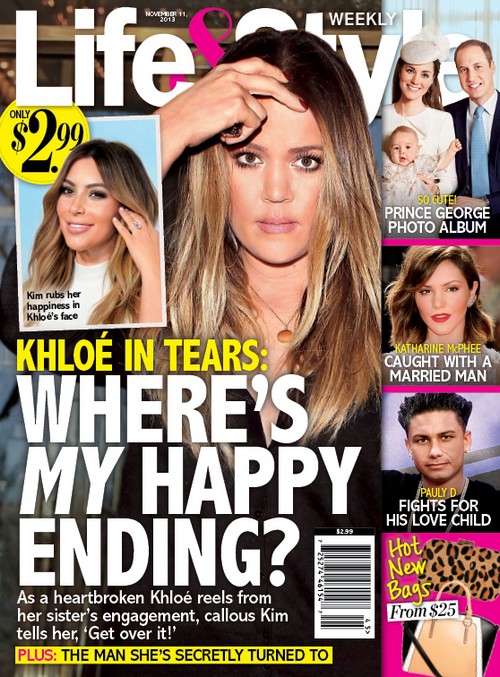 We’ve always known that there’s infighting between the Kardashian sisters, but I don’t think anyone realized how bad it was. According to the report, Khloe Kardashian is jealous of Kim Kardashian‘s engagement and ‘happy ending‘, especially since she’s still estranged from her own longtime hubby Lamar Odom.

Apparently, Kim is rubbing her happiness in Khloe’s face, and as Khloe tries to get over her own heartbreak, a ‘callous Kim‘ has reportedly told Khloe to ‘move on with it’.

Yeah, I don’t think Khloe’s the only person that Kim is annoying with her constant gushing of happiness. If it was anybody other than Kim Kardashian, I would actually believe that she was genuinely happy over getting engaged, and she had every right to be angry at people who were trying to bring her down. But because it’s Kim, and we know she doesn’t feel happiness like a normal person, it’s likely that she’s just satisfied that the attention’s on her – FINALLY. She spent months and months cooped up in a pregnancy, and then couldn’t come out for another few months while she lost her baby weight. She’s happy that the public is finally talking about her again, especially without mentioning her weight, and she’s not about to let her sister steal the attention.

Life & Style also has a feature on Prince George‘s baby album, just like every other tabloid this week. Of course, there’s also a feature on Katharine McPhee’s affair with her married director, and for some reason, people seem to care? Come on, these two are not Kristen Stewart and Rupert Sanders, and I doubt anyone cares about Katharine McPhee’s private life that much.