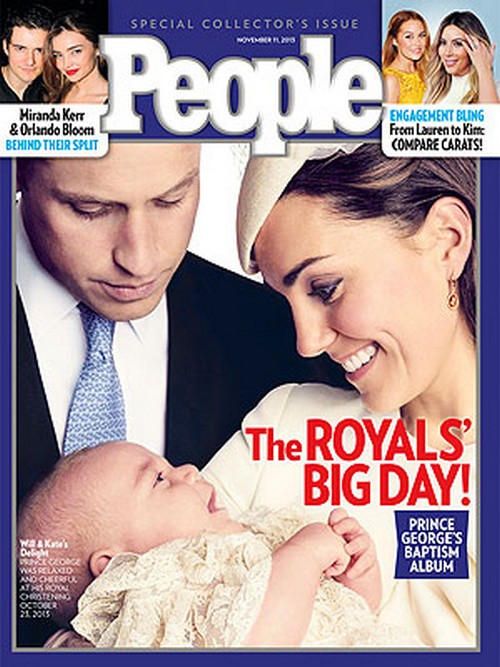 This week’s People Magazine cover is all about the royals. Kate Middleton and Prince William are featured on the cover, smiling down at their adorably happy son, Prince George. The photo is one of the official portraits released from the Christening, and this entire issue seems devoted to the Prince George photo extravaganza.

They have an entire section devoted to George’s baptism album, and also a feature on Will and Kate’s ‘delight‘ with their young baby. It’s a special collector’s issue, which means that they won’t have their usual ass-kissing features on celebrities and celebrity dating.

There is also a feature on Miranda Kerr’s and Orlando Bloom’s split, which focuses on the reasons for their divorce and how they’ve managed to stay so amicable in the wake of their breakup. One of the biggest reasons is obviously to make the split smoother for their young son, who is still a toddler and would be affected the most by the transition. There are several other reasons being speculated about, but it’s clear that the biggest reason is Flynn [Bloom].

There’s also a comparison piece on Lauren Conrad‘s engagement ring versus Kim Kardashian‘s engagement ring, and the number of carats in each. It seems that even in 2013, we can’t let two celebrities be engaged without comparing them in some manner or other. Then again, it’s People Magazine so I wouldn’t be surprised of Lauren’s people and Kim’s people reached out to People for the editorial.

What do you guys think about People’s stories this week? A bit lackluster, no? Especially since most of the baptism album is already available online, so it’s not like they’ll have anything new in the feature. Let us know your thoughts in the comments.