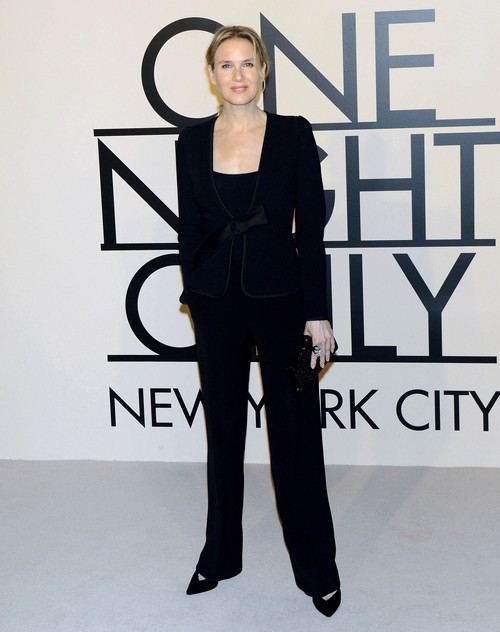 Renee Zellweger stepped out for a screening for The Long Shot: The Kevin Laue Story in Burbank this weekend, and she shocked onlookers with her drastically new face.

Renee’s always had a difficult time dialing back on the plastic surgery, but the 40-year-old looked truly different at the screening. For one, the previous plastic surgery rumors were only concerned with her getting some minor botox to get rid of wrinkles, and perhaps some cheek plumping. However, Renee – who was often called ‘squinty’ Zellweger – has clearly just gotten a procedure done on her eyes, since they went from her normal squinty look to being noticeably wide-eyed, giving her a look of perpetual surprise.

A plastic surgeon weighed in on the changes, and told Radar Online, “It appears that she may have undergone injections of Botox, preventing her brows and forehead from creating her trademark look. Her brows look more relaxed, allowing her eyes to open up more.” Although the surgeon praises the effect that Botox had on her face, fans weren’t so kind.

Many people took to message boards and comment sections to berate the star for messing with her face, with one fan writing, “This is the biggest mistake of her life. She took all that was cute and different about her and destroyed it. Her career is over.” Um, buddy, her career was over a long time before this. Her last movie was in 2010, but you could say that her career ended its hot streak way back in 2006. Since then, her face has taken on variations of his ‘normal’ version, although this latest debut is by far the farthest removed from her original face.

It’s actually a bit tragic. Even though the likes of Sandra Bullock and Melissa McCarthy continue to prove that you don’t need to be botoxed or look young to continue doing well in Hollywood, a lot of 40+ aged actresses clearly haven’t gotten the memo. While Renee’s plastic surgery hasn’t descended to the level of Nicole Kidman‘s, Nicole is at least still getting roles. With her new look, I doubt anyone would touch Renee with a 10-foot-pole, which is actually sad because she’s genuinely talented.