‘The Hills’ Stars Three Years After The Show Ended (PHOTO) 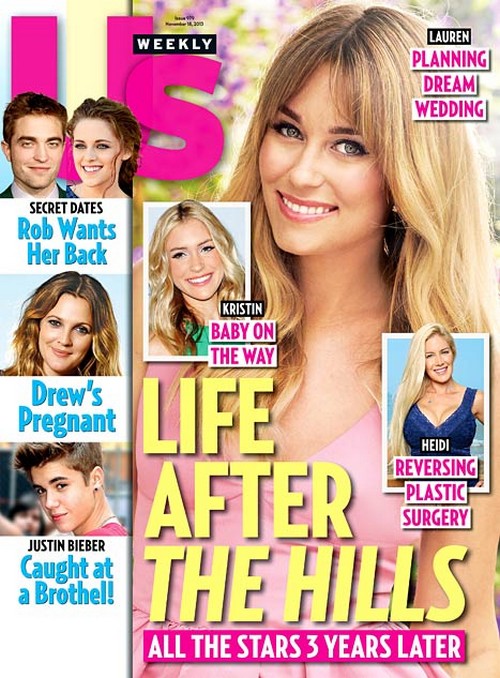 Is it just me, or is US Weekly going downmarket lately? They keep covering D-list reality stars, and giving us ‘exclusives’ on them – uh, we don’t care. We want the US Weekly of 2012 back, breaking stories like the Robsten Trampire cheating scandal. No more Kardashians and Hills people, please.

Our pleas for now have gone unheard, since the latest cover issue is focused on the stars of The Hills, Lauren Conrad, Heidi Montag, and Kristin Cavallari, three years after the show’s ended. We know where Heidi’s at – broke, desperate for any ounce of attention, and attempting to reverse her drastic plastic surgery. Kristin has gotten married to a respectable and successful football player, and she has a kid on the way. And Lauren has surprisingly become one of the most legitimately successful people to come out of any reality show, let alone The Hills. She’s had several successful book releases, started a clothing line, developed a brand name, and is now planning her dream wedding – talk about turning your life around!

The weekly tabloid also has a report on the hot story that has everyone buzzing this week – Robsten reunited. According to their sources, Robert Pattinson wants Kristen Stewart back, and regrets the past few months of staying away from her. Ugh, he’s so whipped by the trampire.

There’s also a feature on Drew Barrymore‘s pregnancy, since that’s the hottest pregnancy story to come out in the news this week. And of course, what tabloid doesn’t have at least a mention of Justin Bieber‘s recent shenanigans in Brazil? He’s even giving rock stars a run for their money, going to brothels and illegally painting graffiti into national buildings. He’s going to actually get arrested one of these days and end up in jail, and nobody’s going to lift a finger to help him.