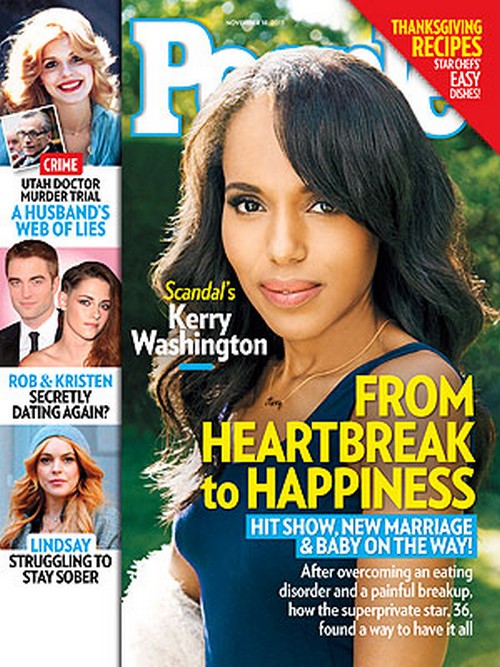 The latest issue of People Magazine features Kerry Washington, current ‘It’ girl of primetime television and darling of the fashion world. Kerry seems to be on top of the world right now, what with her recent Emmy nomination, her television show Scandal topping ratings week after week, and her recent marriage and pregnancy announcement.

As Kerry’s friend Joe Reinstein tells People, “Kerry’s in it to win it, and she’s winning. She deserves everything.” Of course, People has an extensive interview with Kerry, detailing Kerry’s past issues with her body image, her relationship woes, and the battles she’s had to face while rising up the Hollywood hierarchy.

The problem with Hollywood is this – they always make room for one or two token minority actors and actresses, and the rest are shunted to the wayside. Right now, they have Kerry Washington as the queen of television, Halle Berry as a critical and tabloid darling, and Zoe Saldana as the queen of Science Fiction. But what about the rest of the African-American actresses who are just as talented, but never get opportunities?

It’s even worse for Asian actors and actresses, who often have only one taken celebrity in Hollywood. So will it ever change? It took Kerry more than ten years to make her mark on Hollywood, despite having the talent, tenacity, business acumen, and looks to have made it a long time ago. I guess we’ll just have to wait and cross our fingers for Hollywood to start taking notice and become more diverse.

People also has a feature on Lindsay Lohan‘s struggle to stay sober [so what else is new?], and Kristen Stewart‘s reunion with Robert Pattinson and whether they are secretly dating behind everyone’s backs.