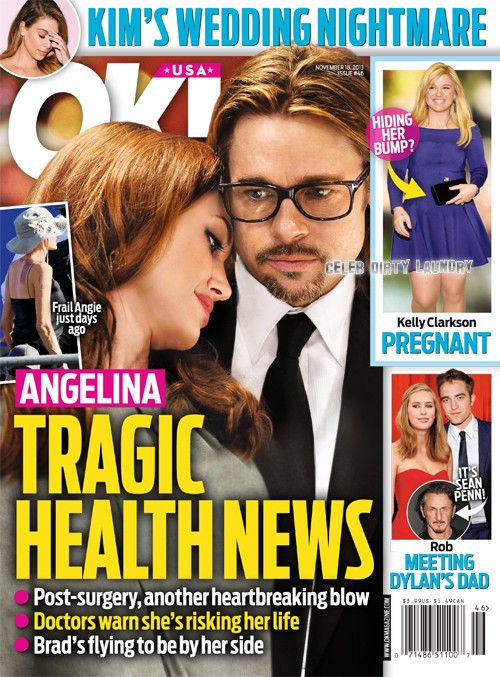 According to the latest cover from OK! Magazine, Angelina Jolie has received some ‘tragic health news’. According to the report, Angelina has grown increasingly frail following her surgery earlier this year, and doctors have reportedly warned her that she’s risking her life by working so hard. As we know, Angelina is currently filming Unbroken in Australia, and the shoot’s not exactly an easy experience, having to mostly be shot in water and in tough conditions.

A source explains, “[Angelina is showing] surprising gauntness just six months after her preventative cancer surgery. With everything she’s put her body through — the surgery and the stress of [directing] this movie [Unbroken] — she’s really defying her doctor’s orders and putting her life in danger by not eating or sleeping.” Apparently, Brad [Pitt] has been telling her that, “she’s way too thin right now. It’s really driving him crazy. He’s been telling her for years to stop starving herself, but she just doesn’t listen. It’s nothing short of tragic that she doesn’t take care of her health.”

The report states that Brad is flying to be by her side, even though he’s still officially in England filming Fury. Of course, tabloids often make up whatever they need to in order for their stories to make sense, and that’s pretty much what’s happening right now. How can Brad be in two places at once? It’s physically impossible, and besides, it’s always been rumored that Brad likes his women skinny. If you look at all of his past partners, you can notice the same trend – they’re all shockingly skinny, especially when they’re with him. And Angelina’s always been skinny, even before her surgery this year. She lost her healthy body after filming the Tomb Raider films, and she’s slowly been getting thinner and thinner. But as much as we can pretend that it’s because she’s wasting away, it’s likely just her preference to stay that skinny.