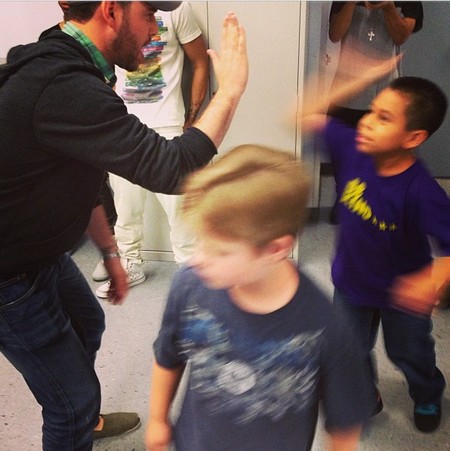 How good of a manager is Scooter Braun? He’s managed to launch Justin Bieber‘s career to the top of the stratosphere, but how much good can he do when Justin is hellbent on destroying his own public image? Well, according to Lil Twist, he can also blame Justin’s recent antics on Justin’s friends.

Lil Twist claimed in a long and extensive Twitter rant [which is difficult to take seriously when there are so many grammatical errors] that Scooter was the reason his image took a hit in the public, especially because Scooter was blaming him and Lil Za for being bad influences on Justin.If we look carefully at the recent reports surrounding Justin in Los Angeles, Lil Twist’s not exactly wrong about that. Lil Twist and Lil Za have taken the brunt of the criticism for ‘corrupting’ and ‘brainwashing’ Justin, and Lil Twist claims that all those reports blaming him were planted by Scooter Braun to deflect the blame from Justin.

He tweeted, “Ima keep it 1,000,000 the media drove me away from ‘social media’ … Not saying they drove me away from my core fans but the shit some ppl are entertained by. It’s been people I’ve surrounded myself with that’s put false information out to help their Side stay squeaky clean… And I took that… But with that being said.. F*** u Scooter and everything u stand for.. And all yo fake stories. It was all planned out… All a set up.. Every story. F** em… But I leave it there .. Now u know…. But what up I’m back. Wouldn’t even lie to ya… S**t crazy. But that’s why I been hella quiet… Didn’t kno what the F** to say.. Knowing the truth… #TeamTwist has spoke!”

He’s not holding back, is he? I suppose he has every right to be furious, especially in his position. He was unfairly blamed, likely just because he was African American. Unfortunately, a large part of America is still racist and would rather believe the white kid was corrupted by the black kid than the other way around.