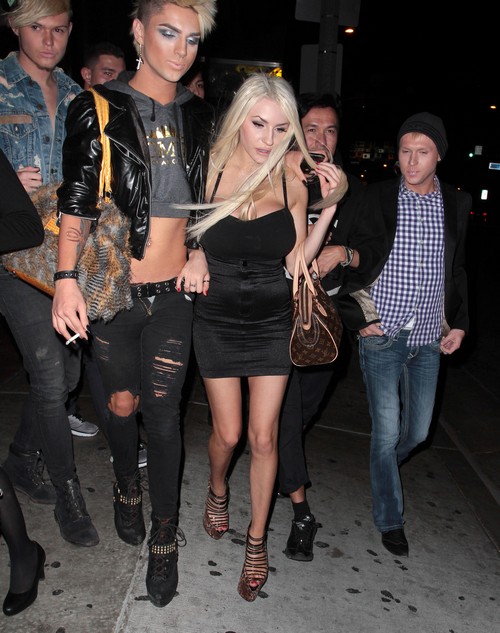 Courtney Stodden has finally broken up with her creepy older husband, Doug Hutchison. Although Doug is said to be ‘devastated’ by the split, anyone who’s heard of their romance wouldn’t be surprised by this news. She was a teen bride and he was in his fifties – in what universe did Doug think that she would stay with him when she grew up and started gaining her independence?

Courtney spoke to E! News about her decision to break up with Doug, explaining, “I couldn’t neglect my desires and wanting to embrace my independence and freedom.”Courtney also denies rumors that this breakup is a stunt to increase media attention and ratings, and insists that it’s permanent. Well, if it is a stunt, it’s working – but if it’s not, good for her. It will probably take a long while and lots of therapy to get rid of the stench of that marriage, and even more to redo all the damage that her plastic surgery has done to her face and body. I mean, she’s a teenager that looks like she’s crossing forty – it’s not a look that anybody can really pull off well.

Strangely, Doug hasn’t given any public interviews about this split yet. No doubt, he’s hoping he can change Courtney’s mind and win her back, and he probably knows that his fifteen minutes in the spotlight will be up the minute that she leaves. But for now, they seem to be remaining on almost cordial terms, and he likely wants to keep it that way.

What do you guys think? Do you think that Courtney’s breakup with Doug was staged, or do you think it’s legitimate? Let us know your thoughts in the comments.