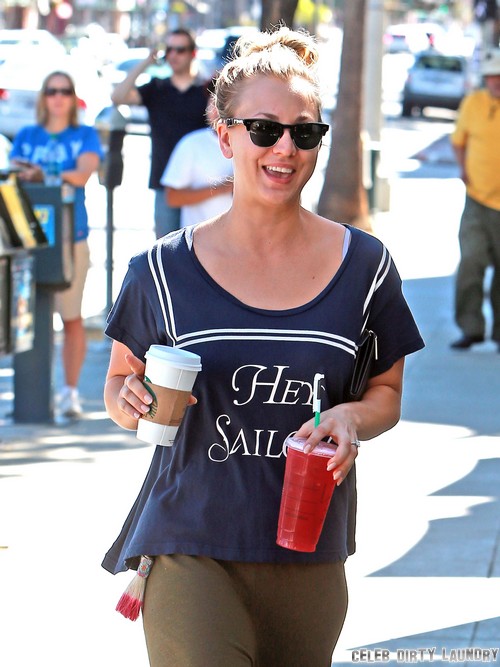 Kaley Cuoco has been in the media spotlight more in the past few months than she ever has in her entire life, and one can’t help but wonder if she had anything to do with that. After all, she did date Henry Cavill for two seconds during the summer before breaking up with him and moving on to a famous tennis player literally days later – and then getting engaged to him practically days after that!

Now, according to a new item on Blind Gossip, which claims, “Her friends are telling us that she is right around the twelve-week mark. She is not quite ready to announce, but will instead spend the next few weeks wearing loose-fitting clothing and hoping that you don’t notice (just like Kerry Washington). She will definitely announce before the end of the year,” Kaley might be expecting.It would certainly explain why Kaley and BF Ryan Sweeting got engaged so quickly, despite the fact that they began dating relatively recently. Sure, Kaley moves fast – that was pretty much evidenced in her relationship with Superman. But fast enough that she goes from just dating to engaged in a month?

Of course, Kaley’s not giving away the big secret just yet. She was on Ellen Degeneres‘ talk show the other day, and when asked about her engagement, she explained that mutual friends set her up with Ryan, adding, “By day two I was like, ‘Oh my god.’ It was so unbelievable. I said, ‘This is it, this is it.'”

If she says so? It’s kind of sad that she’s throwing Henry under the bus, but since it was a PR-approved showmance, I guess she’s allowed to do that.

What do you guys think? Is Kaley pregnant? Let us know your thoughts in the comments.