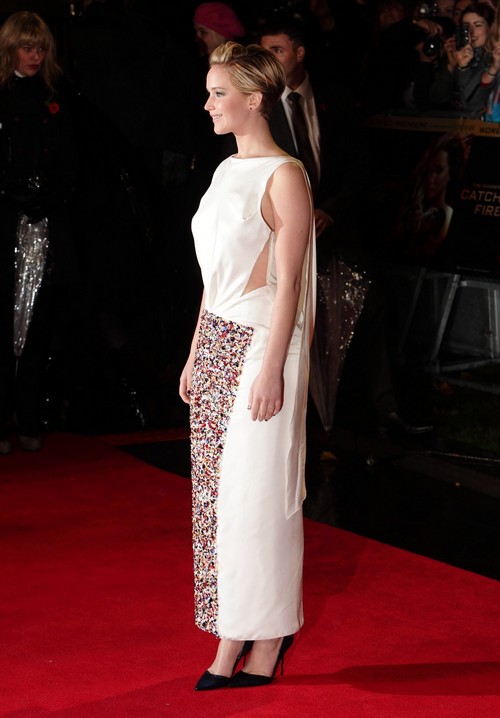 Jennifer Lawrence has sparked rumors of a possible engagement when she stepped out wearing a sparkly ring on her finger at the AFI tribute to director David O. Russell a couple of days ago in Los Angeles. However, she took off the ring for the Hunger Games: Catching Fire world premiere in London yesterday, which means that either the ring wasn’t anything special – or she didn’t want people talking.

So which is it? Anything Jennifer does is being highly scrutinized and analyzed right now, so the ring might not mean anything. However, it was very sparkly, looked suspiciously like an engagement ring, and was also on her ring finger. She might have felt that with the low-key nature of the AFI event, where only a couple of photos were taken of her [and that too, with David O. Russell], she could get away with it. And of course, wearing a sparkly ring on her ring finger at the Catching Fire world premiere would have literally been asking for trouble. The amount of photos taken of her at the premiere would have naturally lent every entertainment outlet to question the presence of the ring on her hand, and she would be asked about her ‘engagement’ from now until the end of the year.

So whether she’s actually engaged or not, she made a smart decision by not wearing ambiguous jewelry during the event. Now, I still think she’s too pragmatic and focused on her career to get engaged so early, but she and boyfriend Nicholas Hoult do seem awfully serious for such a young couple. She’s also admitted her desire to get married, get settled, and have babies soon – so an engagement doesn’t seem that far out of the realm of possibility, does it?