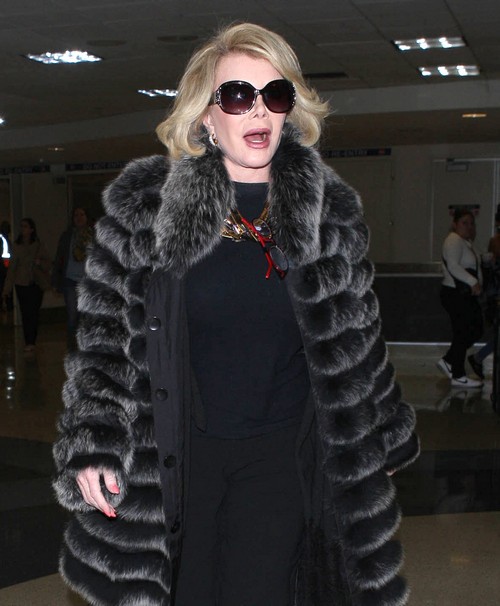 This has got to be one of the more pointless feud that Joan Rivers has gotten herself into. Joan’s not unaccustomed to controversy, but there’s no way she’s going to gain any support this time – not with everyone’s favorite BFF Jennifer Lawrence against her.

The whole situation started when Jennifer was asked on her thoughts regarding body image, and she explained, “Shows like the ‘Fashion Police’ and things like that are just showing these generations of young people to judge people based on things [that don’t matter]. They put values in all the things that are wrong and [show] that it’s ok to just point at people and call them ugly and call them fat and they call it fun.”

Everything she says certainly rings true. Hollywood does tend to focus on the superficial aspects of a person rather than anything else, but that’s just the way the industry works. I think it’s actually changing a lot nowadays, especially with the focus being put on good stories and talent rather than good looks. Jennifer Lawrence is one of the most talented actresses of her generation, but without the power the Hunger Games and her Oscar afforded her, she would no doubt still be asked to lose weight and diet – even though she looks perfectly fine as it is. Shows like the Fashion Police and even E! definitely put too much emphasis on looks, hair cuts, and weight loss. I mean, they do have schlock like the Kardashians and other crappy reality shows that keep them relevant, so I suppose it’s built into their brand name at this point.

Regardless, Joan didn’t take Jennifer’s criticisms lightly, and retaliated on Twitter by saying, “It’s funny how Jennifer Lawrence loved @E_FashionPolice during Awards Season when we were complimenting her every single week… But now that she has a movie to promote, suddenly we’re picking on all those poor, helpless actors. WAIT! It just dawned on me why Jennifer Lawrence fell on her way up to the stage to get her Oscar. She tripped over her own arrogance.”

Um, when did Jennifer Lawrence ever ‘love’ the Fashion Police? She’s always stated that she hates the superficiality of Hollywood, and the Fashion Police really is an epitome of everything that’s wrong with the industry. It’s just clothes, for goodness sake. Who cares?!