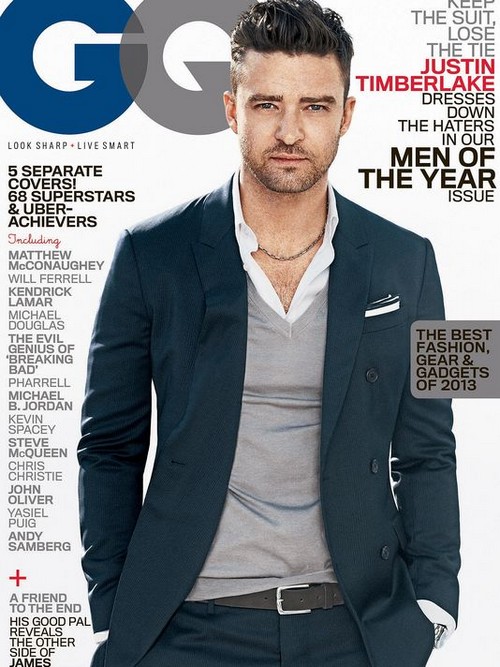 To say Justin Timberlake is a narcissist would be to state a fact. To be told over and over and over again that he’s the most talented pop star in the world would obviously get to anyone, and it’s clearly gotten to him. In fact, his ego has gotten to such a point that he cannot admit when he’s failed, and he also refuses to admit that he’s bad at anything. No, Justin will become an actor, and damn all the journalists if they think otherwise! Justin will not back down! He will persevere, despite the fact that he’s already an in-demand musician and has millions of dollars to fall back upon!!

Basically, Justin covered the latest issue of GQ Magazine, and the topic turned to the failure of his latest movie, Runner Runner. The film was a major box office disaster, but the blunt of the criticisms were focused on Justin and his inability to act/have a screen presence. Yes, Gemma Arterton and Ben Affleck were both part of the film, but there’s not much they could have done to save an abysmal script. However, on the other hand, Justin proved that with a bad script, he’s not only distractingly bad, but that he’ll also ruin every scene with his brilliant ‘acting’.

But of course, Justin can’t take criticism. He rants to GQ, saying, “The movie didn’t do well at the box office, so I should quit? Hold on a second. If I was somebody else, you wouldn’t have said that. I have the number one album this week, and I shouldn’t have released it? Come on, man. You sound like a dickhead . . . It just shocked me because, like, you’re trade magazines. None of your opinions count. And by the way, none of you can do it.”

Wow, way to be an asshole about it, no? There was no need to call the journalist a dickhead just because he brought up comments about Justin’s lack of acting prowess. And also Justin, you shouldn’t quit because the movie didn’t do well at the box office. You should quit because you can’t act. You don’t see journalists telling Gemma or Ben to quit, do you? Nope, just you.