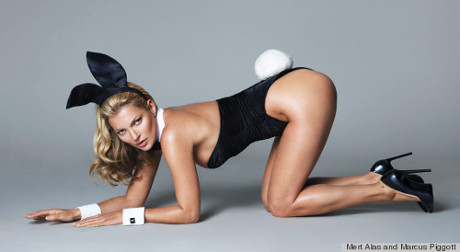 The full spread and cover photos of Kate Moss will be appearing in the 60th anniversary January/February 2014 issue of Playboy, which is due out in early December. The photo above, not overly scandalous, will serve as a sneak peek preview of sorts and will appear in the next month’s issue.

The photo features Kate Moss doing her best bunny pose, perhaps drawing inspiration from and paying homage to the magazine’s older shoots — the ones that the magazine has become so famous for. Seems quite fitting, especially for an anniversary issue.

What do you think of the photo? Will you be running out to pick up a copy of the mag? Let us know in the comments section below!

16 Comments
Leave A Reply
Cancel Reply
For All The Alaskan Bush People News!