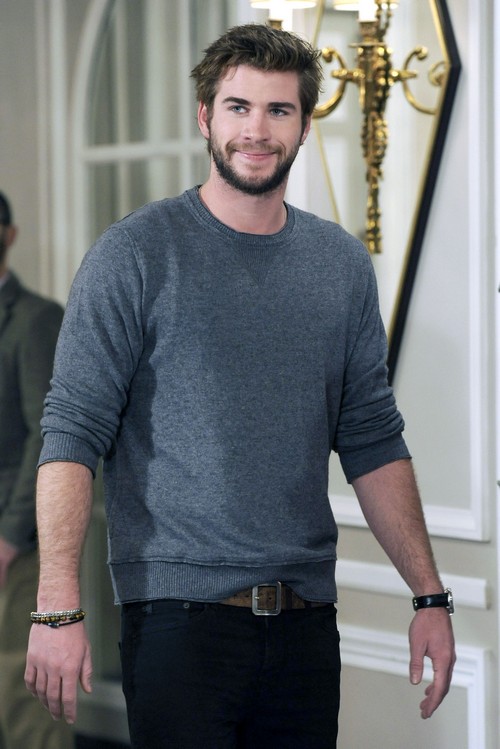 Liam Hemsworth has been busy with press for The Hunger Games: Catching Fire, which has allowed several enterprising and pushy reporters to question him about his love life. After all, Liam hasn’t been publicly interviewed since his official breakup with Miley Cyrus, and this press junket finally provided reporters with the opportunity to grill Liam for details.

According to Liam, he’s single and not dating anyone at the moment. Oops, sorry Eiza Gonzalez – looks like you were just a fling.

The actual interview went down like this: Extra’s interviewer asked Liam if he baked for his ladies, and Liam’s response was, “I don’t have a lady at the moment.” Of course, the interviewer couldn’t just let it finish there, and then asked Liam that since things didn’t work out with Miley, was he proud of her successes?

In my opinion, that’s the stupidest question she could have asked. What’s he going to say, ‘No, I’m very unhappy about my ex-girlfriend’s public shenanigans and I wish I never dated her’. No, of course not – he’s more of a gentleman than that! Instead, he goes with a diplomatic answer, saying, “I’m extremely happy for all of her success.”

I have a lot of mixed feelings about the way Liam handled their breakup, but I do appreciate that he’s not throwing Miley under the bus first chance he gets. It would be very easy for him to do so, considering the rest of the world is doing it too – but he resisted any impulse to say anything negative and was respectful. Good for him. Now, if we can somehow convince Miley to follow in his lead.