Justin Bieber Once Again Mired In Controversy, This Time For Disrespecting Argentinian Flag During Show 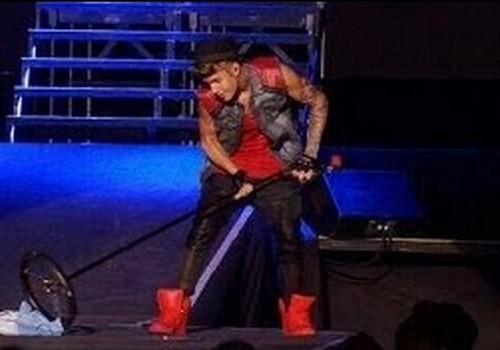 Our favorite teenage trouble maker, Justin Bieber, is currently terrorizing another continent for the time being, having embarked on his South American tour several weeks back. His shenanigans in the South have been well documented by the media there, and needless to say, he’s not keeping a low profile.

He’s already almost been arrested for spray painting graffiti on a government building, hired prostitutes and hookers, gotten kicked out of a first class hotel, and in general wreaked havoc wherever he went. The latest controversy surrounds Justin’s idiocy during a show, where he reportedly kicked two Argentinian flags off the stage using his shoes and a microphone.

Usually, when a singer is on stage and fans toss up the flags of the country, the singer will hold up the flags or use the flags in their performance – you know, as a sign of respect to the fans and the country that’s hosting them. But nooo, not Justin. Based on the video footage available from this event, he basically kicks and throws the flags off the stage as soon as he can.

Insulting Argentina’s flag can actually land you up to four years in prison, so Justin might want to be careful about ever repeating that incident. I’m usually the first one to hate on Bieber, but this honestly comes across as ignorance to me. I’m not defending his actions by any means, but I think it was more his stupidity than it was anything of malicious intent.

Of course, Justin’s already apologized and claimed that he didn’t mean to offend anybody. But of course – when do celebrities ever ‘mean’ to offend anybody? Most of the time, it’s just their narcissistic behavior and actions that do the trick.