Robert Pattinson And Kristen Stewart Are Getting Married: Reunited At Last 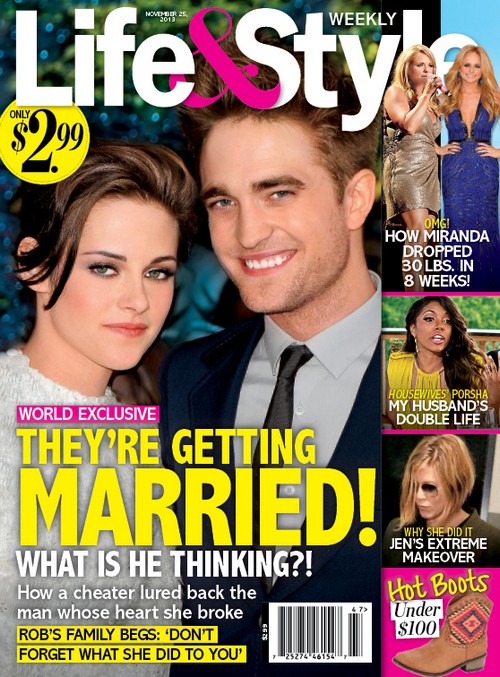 Have I just stumbled into the Twi-hard alternative universe land? The latest cover issue of Life & Style Magazine claims that Robert Pattinson and Kristen Stewart are getting married. That’s right, MARRIED. I’m sorry, Rob’s stupid for getting back together with his cheating ex-girlfriend, but I don’t think he’s THAT stupid.

According to the report, Rob’s family is begging him not to marry Kristen, reminding him of what she did to him. If they really were on the verge of getting married, I don’t think his family would be the only ones trying to stop him. I have no doubt that his friends and manager would also intervene, not necessarily just for personal reasons. Career wise, Rob’s image is still very much that of a ‘heartthrob’, and getting married to someone with such a bad public image would throw his own public persona into the gutter.

Like I said, I doubt this is true. If it is, we can expect an epic meltdown from both fans and the media, but for now, I think Rob is being extremely careful in playing it slow and stealthy with Kristen.

Life & Style also has a report on Miranda Lambert‘s drastic, 30 pound weight loss over a period of three months. Instead of focusing on the negative health affects, all the tabloids seem to be doing is praising her and promoting this kind of unhealthy and obsessive behavior in readers. Boo!

And finally, we got the long-awaited details on Jennifer Aniston‘s haircut and makeover [sarcasm], and the reasons she decided to cut it all off after so many years.