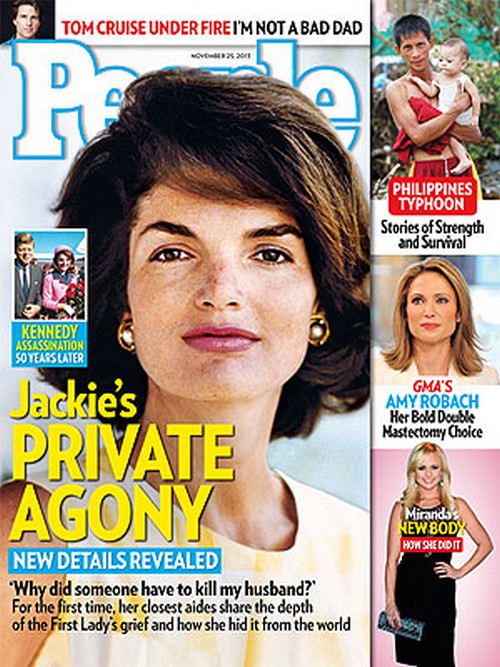 With all the recent intrigue and conspiracy theories over John F. Kennedy Jr.‘s death, it’s fitting that People Magazine’s new cover is devoted to Jackie Kennedy.

There have already been tons of books based on Jackie’s life and the aftermath of JFK’s death, but another one is set to release within the next few weeks. People Magazine has an exclusive excerpt from Clint Hill’s book Five Days In November, which deals with Jackie’s life and her return to the public eye after JFK’s assassination.

Hill, the author of the novel, was responsible for protecting Jackie during the infamous Dallas motorcade. Now 81 years old, he’s finally opening up about those tumultuous days in Jackie’s life. He explains in the excerpt, “She was sad. She didn’t have the same radiance as before. But she grew stronger. She was already thinking about his legacy. She was always thinking ahead.”

Although Jackie did return to the public eye after JFK’s death, it was short lived. Eventually, she ended up moving to Georgetown and then later Manhattan, where she was able to carry out the rest of her life in relative peace and anonymity.

In addition to Jackie’s cover story, People’s also devoted an entire section to covering the devastating typhoon in the Philippines which has killed thousands and uprooted even more. There are stories from survivors, and details on how catastrophic the storm ended up being for the populated nation.