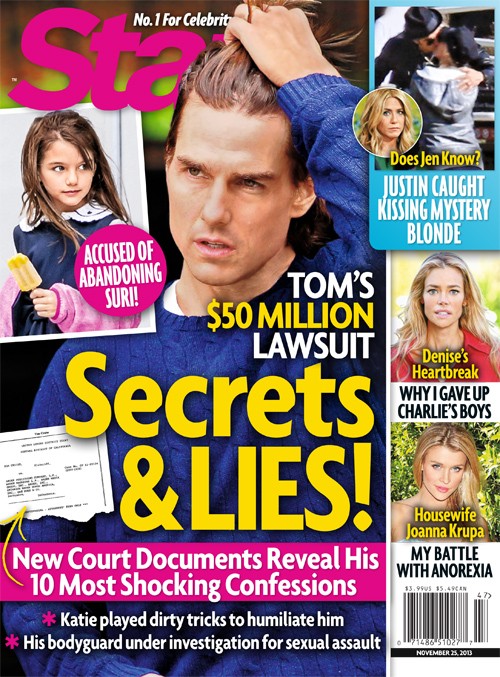 Star Magazine loves Tom Cruise conspiracy theories, so it makes sense that after his revealing deposition went public earlier this week, their latest cover issue would be all about Tom. Their latest report claims that Tom’s bodyguard is being investigated for sexual assault, which serves as an additional blow in the wake of all the bad press. None of these reports painted him in a flattering light, considering most of them were about him abandoning Suri Cruise for three months, comparing his job to soldiers in Afghanistan, and how his divorce to Katie Holmes was caused by his fanaticism and obsession with Scientology.

If I was Tom, I would drop that $50 million lawsuit against the tabloids asap. He doesn’t need the money, and he definitely doesn’t need any more public exposure. The public already thinks of him as a crackpot, and any more bad press could push him over the edge.

Star also has several images, purported to be Justin Theroux kissing another woman. Is he cheating on longtime fiance Jennifer Aniston, or are the pictures misleading? Several reports claim that the woman Justin was kissing could be his ex-girlfriend Heidi Bivens, but when Jennifer finds out, will this mean the end of their relationship?

Also, real housewife Joanna Krupa discusses her battle with weight loss, and Denise Richards reveals the real reasons she gave up Charlie Sheen‘s twin boys. I’m not sure I’m going to believe her alternate reasons, since I’m sure she just doesn’t want to be seen as the woman who sent those boys back into the arms of their abusive and drug-addicted birth mother.