Celine Dion’s Marriage Is Over 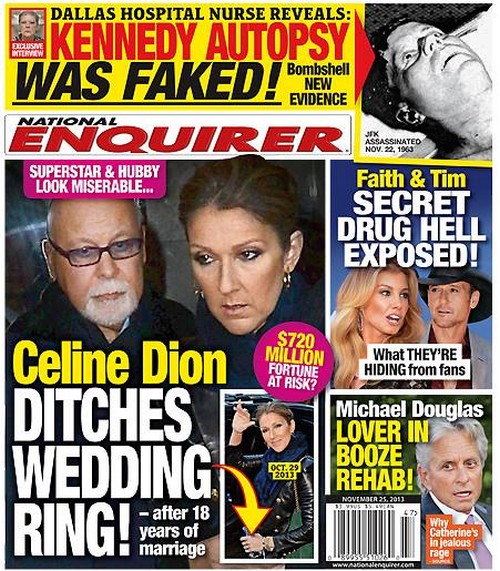 Has Celine Dion‘s marriage to husband [and manager] Rene Angelil failed? The latest issue of the National Enquirer claims that Celine has been spotted ditching her wedding ring after almost eighteen years of marriage. According to the report, almost $720 million of Celine’s fortune is at risk with the possible divorce, especially if she and Rene are serious about their [rumored] separation.

There’s been a recent trend in tabloids over picking up divorce stories from stars not wearing their wedding rings in public, but there are many reasons that people might not wear their rings. Celine has always been very private with her marriage, but if there was something seriously wrong, I think we would have heard about it by now.

The Enquirer also has a story focusing on Faith Hill and Tim McGraw‘s ‘secret drug hell’ and the public exposure that could shock their fans and the rest of the world. I don’t know about drugs, but I can definitely buy that Tim is hiding a lot behind the scenes, including infidelity.

Also, apparently Michael Douglas‘ lover is in rehab for an alcohol addiction, a fact which has thrown Catherine Zeta-Jones into a ‘jealous rage’. Uh, if Michael’s lover is in rehab and no longer in the picture, wouldn’t Catherine be happy about that fact?

Of course, it wouldn’t be an Enquirer cover issue without some scandalous story about old Hollywood. This time, a Dallas hospital nurse reportedly reveals that JFK‘s autopsy was faked, and there is new evidence to support all the conspiracy theories surrounding his death. What a coincidence that this story is coming out around the 50th anniversary of his death.