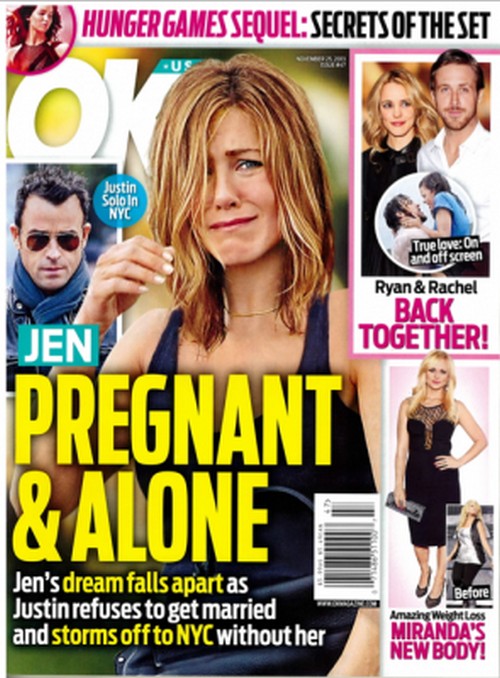 The timing of this latest report is quite fortuitous, considering Justin Theroux is supposedly cheating on Jennifer Aniston with another woman [possibly his ex-girlfriend Heidi Bivens] in New York City.

This week’s cover issue from OK! Magazine claims that Justin and Jennifer are living apart, after Jennifer found out that she was pregnant and Justin stormed off to New York City. According to the very dramatic report, Jennifer’s ‘dream falls apart as Justin refuses to get married and storms off to NYC without her.’

They’re making it sound like Justin threw a hissy fit and left Jennifer after he found out she was pregnant. First of all, OK! seems to report on Jennifer’s ‘pregnancy’ every other month, and also, Justin has a job in NYC. He’s shooting a HBO show there, so it’s not like he just decided to up and peace out with no notice. If Jennifer wants, she can easily join him there. It’s not like she’s shooting anything right now, so it’s pretty telling that she’s choosing to stay in Los Angeles instead.

OK! also has a featured story on Ryan Gosling and Rachel McAdams getting back together, which will delight McGosling fans to no end. However, I feel like this story is more a product of wishful thinking than it is actual fact. For one, Ryan’s still technically with Eva Mendes, and for two, I don’t think Ryan and Rachel will really go down that road again.

And lastly, we can’t seem to have tabloid covers this week without delving into Miranda Lambert‘s weight loss, which is also covered in extensive detail. We get it, Miranda, you lost a lot of weight. Now stop paying tabloids to report on it.